Former Federal Bureau of Investigation director James Comey says in a new book that President Donald Trump reminded him of a mafia boss who demanded absolute loyalty, saw the entire world against him, and lied about everything. 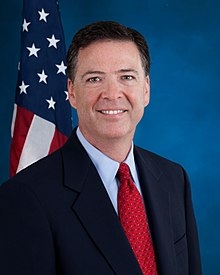 Comey also says in his book releasing next week that Trump had seemed fixated about proving false an encounter with prostitutes in Moscow that Russian intelligence had allegedly filmed in a controversial intelligence dossier.
Comey, who had battled ‘the Mob’ or the mafia as a young prosecutor, says he saw in Trump’s White House the same “silent circle of assent … the loyalty oaths … the ‘us-versus-them’ worldview … (and) the lying about all things, large and small”, according to portions cited from advance copies of the book, “A Higher Loyalty: Truth, Lies and Leadership”.
Comey, whom Trump fired in May 2017, says the US president lives in "a cocoon of alternative reality" that he tried to pull others around him into, according to reviews in various publications.
Meetings with Trump gave Comey "flashbacks to my earlier career as a prosecutor against the Mob," he writes.
The former FBI director also calls the president “unethical, and untethered to truth and institutional values (and that) “is leadership is transactional, ego-driven and about personal loyalty”.
Comey goes farther to say that Trump, congenitally, has no sense of what is right and wrong.
Comey also noted other things, such as the President’s hand was smaller than his — a revelation which Trump may not like, because in previous exchanges with others he has held it as representing manhood — and that he has white patches under his eye that stand out against the orange pallor of the skin and that his brilliantly blonde hair is genuine.
The book, or from what has appeared about it in American news publications, makes no explosive revelation but abounds in previously unreported details about known and reported encounters in the brief period the two men worked together, from the election to the time Comey learnt he had been fired from a news flash on TV during a field visit to California.
"A Higher Loyalty" shares little new about the Russia investigation, with Comey bound to respect the classified nature of the Mueller investigation that Trump just this week labelled "fake & corrupt."
There are more and granular details of the White House dinner at which the President asked Comey for his loyalty, and of the meeting at which Trump asked his top FBI official to “let … go” of the probe into former National Security Advisor Michael Flynn’s Russia contacts.
The first time they discussed the alleged incident with prostitutes was in January 2017, after a briefing of then president-elect Trump by intelligence chiefs in Trump Tower. Comey had stayed behind to tell Trump about the claims made in an intelligence document, now called the Steele Dossier after its author Christopher Steele, a former British spy.
Steele claimed Russian intelligence had photographed the encounter that took place in a Moscow hotel room in 2013 in which Trump, then just a businessman, had paid prostitutes to urinate on themselves and each other on the bed that President Barack Obama and first lady Michelle Obama had slept in during their visit.
Trump had “strongly denied the allegations, asking — rhetorically,” Comey has reportedly written, “I assumed — whether he seemed like a guy who needed the service of prostitutes.”
According to the New York Post, Comey says Trump was obsessed with the "pee tape," the existence of which was first reported by a former British intelligence agent who researched alleged links between Trump's campaign and Russia.
Trump asked Comey to investigate "what he called the 'golden showers thing'" Comey writes, saying Trump was determined to prove to his wife Melania that it did not exist.
“I’m a germaphobe,” Trump said to him in a follow-up call a few days later, according to Comey. “There’s no way I would let people pee on each other around me. No way.”
Comey is quoting direct quotes from contemporaneous notes he had begun keeping of his conversations with Trump, he has said before.
The former FBI director wrote he wondered, “In what kind of marriage, to what kind of man, does a spouse conclude there is only a 99 per cent chance her husband didn’t do that?”
In the past year two women, one a pornographic film star and the second a Playboy model, have said they were paid off to be silent about affairs they had with Trump over a decade ago while he was married to his current wife Melania.
MORE REPORTS