It certainly looks like the Indian diaspora is everywhere these days. Infosys co-founder Narayana Murthy's son in law Rishi Sunak is one of two Indian-origin junior ministers in the UK government, inducted in Prime Minister Theresa May's much-anticipated reshuffle on Tuesday. The other is Suella Fernandes, a Goan-origin MP. 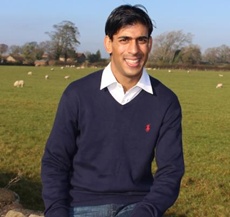 Sunak is a former businessman who was elected from the safe Tory seat of Richmond Yorkshire in 2015. He was re-elected in 2017 with a higher margin. Sunak, seen as a rising star in the Conservative party, will be the parliamentary undersecretary of state in the ministry of housing, communities and local government.

Suella Fernandes, 37, is a former barrister and an MP from the southern constituency of Fareham. She will become a minister in the Department for Exiting the European Union. Fernandes has lately emerged as a major figure in the Conservative Party and was a vocal Brexit campaigner.

Theresa May has made some other key changes that include changing the portfolio of minister of state Alok Sharma from housing to employment. Sharma, 50, was closely associated with dealing with the Grenfell tower blaze in London in June last year, which caused 71 deaths.

Sunak, who was also pro-Brexit, made notable contributions in the House of Commons on issues such as the digital economy, illegal wildlife trade, foreign direct investment and social mobility.

Sunak, the UK-born son of an Indian doctor and a pharmacist mother, married Narayana Murthy's daughter Akshata Murthy in 2009. He studied at the famous public school Winchester College and Oxford and did his MBA at Stanford University. Akshata Murthy was his classmate at the Stanford Business School. The couple has two daughters, Krishna and Anoushka.

Writing for the Conservative Home website earlier this year, Sunak criticised the EU's ''dismal record'' on opening up new trade markets for member states, arguing that outside the customs union, Britain could ''regain control'' over its trade policy.

Fernandes, a member of the pro-Brexit Conservative organisation, European Research Group, is also a strong advocate of Brexit, telling the Commons recently that Britain's future lay in reviving the Commonwealth and its links with markets such as India.