President Donald Trump's former security adviser Michael Flynn on Friday pleaded guilty to lying to the FBI about his contacts with the then Russian ambassador, Sergey Kislyak, and revealed that he was cooperating with Special Counsel Robert Mueller in his inquiry into possible collusion between the Trump camp and Russia over Moscow's interference in the 2016 election. 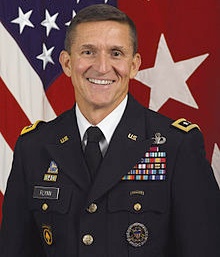 Mueller has now ploughed into the centre of Donald Trump's administration, securing a guilty plea from Trump's first national security adviser and placing markers on two other advisers, including the president's son-in-law, Jared Kushner.

Michael Flynn admitted he lied to Federal Bureau of Investigation agents in January about conversations he'd had with Russia's ambassador to the US. But he testified on Friday that he had fully informed members of Trump's transition team about the communications, and had been guided by them.

As well as establishing that there was a possibly illegal overture to the Russians about easing the sanctions policy by a number of senior members of the Trump transition team, it was suggested by legal experts that the fact Flynn had only been slapped with a relatively minor charge suggested he had been recruited by Mueller to give evidence against a much bigger fish.

The former national security adviser's charge sheet also raises the possibility of the Trump staff who knew about his conversations with Kislyak being prosecuted for false statements if they claimed not to have been aware of them.

In the waning days of his presidency, Barack Obama responded on 29 December to Russia's interference in the US election by issuing sanctions and ejecting 35 Russian diplomats.

Two weeks later, as president-elect Donald Trump readied for his inauguration, The Washington Post reported that Flynn and Kislyak had spoken by phone on or around the day sanctions were handed down. (The Post later reported that Flynn had been warned in November that Kislyak's conversations "were almost certainly being monitored by US intelligence agencies".)

The Flynn-Kislyak conversation raised questions about whether Flynn had undercut Obama's move against Moscow, particularly after Russian President Vladimir Putin declined to retaliate.

In the days after the Post revealed the Flynn-Kislyak phone call, key members of the Trump transition team, including White House press secretary Sean Spicer, Vice President Mike Pence and White House chief of staff Reince Priebus, denied that sanctions came up during the conversation. Flynn also denied this to the Washington Post.

But Flynn's guilty plea removes any lingering doubt about whether sanctions figured into his discussion with the Russian ambassador.

In court, Flynn explained that in late December, as Trump prepared to enter the White House, a ''very senior member'' of his transition team urged Flynn to seek Russia's support on a United Nations security matter. Flynn then asked Russia's US ambassador, Sergey Kislyak, to help delay or defeat a UN Security Council vote involving Israeli settlements. The senior transition member was Kushner, two people familiar with the matter told Bloomberg on Friday.

About a week after the UN matter, Kislyak reached out to Flynn when the Obama administration imposed sanctions on Russia for election meddling. Flynn called a senior transition team official at Trump's Mar-a-Lago resort. Afterward, he asked Kislyak to moderate Russia's response, and told the Trump camp what he'd done. Russia soon dialled back its response.

K T McFarland was the person at Mar-a-Lago, according to Bloomberg's sources. Flynn had brought McFarland to the transition and White House. She was deputy national security adviser until April and is now Trump's nominee to serve as US ambassador to Singapore.

A spokesman for Kushner referred questions to his lawyer, who didn't respond to requests for comment. McFarland couldn't immediately be reached.

''This shows a Trump associate negotiating with the Russians against US policy and interests before Donald Trump took office and after it was announced that Russia had interfered in our election,'' Senator Dianne Feinstein, a Democrat from California, said in a statement, adding that it's critical to find out ''who knew and approved of his actions.''

Major step for Mueller
The Flynn plea is a major step for Mueller's quickly advancing investigation. Mueller has already charged Trump's former campaign chairman Paul Manafort and his deputy over their earlier business activities, and secured a guilty plea from George Papadopoulos, a campaign adviser who pursued Russia's help during last year's election. Papadopoulos is cooperating with the probe.

Flynn, in a statement, said he accepts full responsibility for his actions. ''It has been extraordinarily painful to endure these many months of false accusations of 'treason' and other outrageous acts. Such false accusations are contrary to everything I have ever done and stood for,'' he said.

In cooperating with Mueller's inquiry, Flynn is seeking leniency for himself and possibly his son, who worked with him in his private business. The charge doesn't delve into Flynn's work on behalf of Turkey, which is also under investigation, or his failure to promptly disclose such work to US authorities. At the hearing, Flynn admitted to lying about contacts with Turkey.

In admitting to false statements, he faced a maximum of five years in prison and a $250,000 fine, but is likely to get no more than six months and $9,500 under his plea agreement.

The FBI interviewed Flynn on 24 January, the first week of Trump's administration. A few days later, the Justice Department warned the White House that Flynn could be subjected to blackmail because his dealings with Russians hadn't been disclosed, the Washington Post has reported.

Flynn was forced to resign on 13 February, less than a month into Trump's term. He was accused of misleading vice president Mike Pence -who had led the transition - about his conversations with Kislyak.

The next day, Trump asked then-FBI Director James Comey to drop the probe into Flynn, Comey has testified. ''I hope you can see your way clear to letting this go, to letting Flynn go. He is a good guy. I hope you can let this go,'' Comey said the president had asked. Even after Flynn's firing, Trump defended him publicly, calling him a ''very good person'' who had done nothing wrong.

The charge against Flynn casts a renewed spotlight on Attorney General Jeff Sessions. Sessions recused himself from any investigation into Russia's attempts to influence the 2016 election after Democratic lawmakers accused him of lying to Congress about his own conversations with Russian officials.

Skeletons in closet
After he left the administration, Flynn filed an updated foreign registration form showing that he hadn't disclosed multiple contacts and payments from foreign entities while serving as a campaign adviser to Trump starting in February 2016.

At the time, Flynn, a retired army general, ran a consulting business called Flynn Intel Group. In one case, Flynn's company received $530,000 from Inovo BV, a Dutch company working on behalf of Turkey's government, to lobby the US for extradition of a dissident cleric who has opposed President Recep Erdogan of Turkey.

He's also disclosed payments from RT, described in an unclassified US intelligence report as ''the Kremlin's principal international propaganda outlet,'' and Kaspersky Government Security, a cybersecurity business that US authorities say works closely with Russia's main intelligence agency, the FSB.

Flynn rose to the top of the military's intelligence apparatus during a 33-year career notable for both his battlefield successes and his breaches of the Pentagon's chain-of-command.

Flynn's military service stretched from the 1983 Grenada invasion, where he was a platoon leader, to stints as director of intelligence for the US Central Command, the Joint Chiefs of Staff and the International Security Assistance Force. He retired in 2014 after Obama fired him as director of the Defense Intelligence Agency.

Afterward, Flynn started a private lobbying and consulting practice that did business in foreign countries including Russia and Turkey. Flynn didn't disclose those contacts and payments, as required, when applying for his security clearance to work in the Trump White House.

Top House Democrats have pointed out that Flynn failed to disclose a 2015 Middle East business trip tied to a plan to build nuclear plants in the region using money from Saudi and Russian investors. The Democrats called the omission a crime.

Flynn's son, Michael Flynn Jr, also worked for the consulting firm and is under investigation by the special counsel. The son gained attention during the 2016 president election for promoting conspiracy theories about Hillary Clinton on social media.