Mallya arrested in London in money laundering case, let off on bail 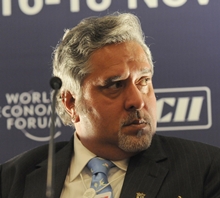 Mallya was granted bail shortly afterwards. This is the second time that Mallya was arrested this year in London.

The London court is likely to club the cases filed by the Central Bureau of Investigation (CBI) and the Enforcement Directorate (ED) since the two agencies are investigating Mallya's financial dealings.

The former owner of Kingfisher Airlines was arrested in London for the second time in a money laundering case today, according to an NDTV report. He was out on bail in another case in which he was arrested in April on an extradition request by Indian government.

The 61-year-old Mallya, who has been staying in London for over a year, will be produced in the Westminster Court in connection with the alleged defaulting on loans worth thousands of crores in India.

Mallya, already out on bail on an extradition warrant executed by the Metropolitan Police earlier this year, will be appearing before Westminster Magistrates' Court in London this afternoon where he is expected to be bailed.

"Vijay Mallya has been arrested on money laundering charges and will be appearing in court today," a CPS spokesperson said.

India's Enforcement Directorate - the agency investigating the case - has already filed a charge sheet against him and others in a Mumbai court.

The CPS will be arguing the case against Mallya on behalf of the Indian government.

Mallya's trial in that case is scheduled for two weeks, starting 4 December.

Mallya left India in March last year after he was dogged by mounting unpaid loans running into several thousand crores of rupees, and has been living in the United Kingdom since.

A case has been registered against him in India for not returning Rs 9,000 crore which he had taken from the IDBI bank, as reported by NEWS 18. An extradition request was sent in February to Britain requesting the businessman to face trial after he left India on 2 March  2016.

Meanwhile, it was also alleged that Mallya moved Rs6,000 crore to shell companies.

Mallya faces nearly half a dozen warrants in India and has been accused for repeatedly refusing to appear before courts and investigators. He was often seen at public events in London, UK.

The British authorities had also initiated probe against him. The Britain's Serious Fraud Office (SFO) had reportedly launched an investigation against the liquor baron for alleged money laundering in the UK and other countries.

Mallya had earlier, dismissed all the charges levelled against him.

"There might be a few more hearings in this case in the coming months to deal with case management or any issues that arise, before the final hearing takes place, at which the full arguments from both sides in this case will be heard by the District Judge," reports quoting Jasvinder Nakhwal, partner at Peters and Peters Solicitors LLP and member of the UK's Extradition Lawyers Association said.

The probe was initiated after it was alleged that Mallya used various firms for laundering money from India to the UK through a complex web of companies, Times of India reported. The UK investigators also suspect that he was also involved in laundering money to Switzerland and other countries.