Arvind Panagariya has resigned as chief economic advisor to the government 2-1/2 years after he was brought in to steer the newly-constituted government think-tank and policy guide, NITI Aayog. 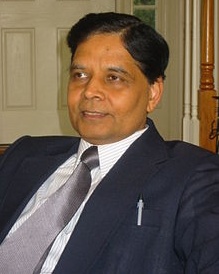 The Indian-born, US-educated economist picked by Prime Minister Narendra Modi as vice-chairman of the government's main policy think-tank said he is returning to New York in September.

Panagariya, 64, who has been on leave from Columbia University to work at the Niti Aayog, said in his letter that his leave was due to expire on 31 August and it was not possible to extend it.

He said he had two months ago expressed his desire to the prime minister, who is also the chairperson of NITI Aayog, to be relieved by 31 August.

Modi brought in Panagariya as the first head of the newly constituted policy body in January 2015, after scrapping the Planning Commission, which was responsible for drawing up the government's five-year economic plans.

The new body, known in Hindi as NITI Aayog, was to function as an enabler for the central and state governments in implementing policy decisions and at times advising the centre and the 29 state governments on the best economic choices available.

While the commission's task has been huge, its performance as reflected in policy implementation has been lacklustre. It has barely come up with the draft of a proposed three-year "Action Agenda.".

A seven-year `Strategy' and 15-year `Vision' for India are yet to be published.

Panagariya said he expected a successor to be named. A person familiar with the matter said the economist had spoken to Modi, whose agreement on his departure was seen as a formality.

There was no official word on the development, although speculation was rife that NITI Aayog is in the midst of a reshuffle where Bibek Debroy, who also is a staunch supporter of Modi and his economics, could be the likely successor.

Another name doing the rounds is that of Chief Economic Advisor Arvind Subramanian, who may be shifted to the NITI Aayog. There have also been murmurs of dissatisfaction in the top government circles about the performance of the NITI Aayog under the leadership of Panagariya, sources said.

Before NITI Aayog, Panagariya served as the chief economist of the Asian Development Bank and has also worked with the World Bank and the International Monetary Fund in various capacities.

In the past, he has been a professor of economics at the University of Maryland at College Park. He has also worked for the World Bank, International Monetary Fund, World Trade Organization, and the United Nations Conference on Trade and Development (UNCTAD). He holds a Ph.D in economics from Princeton University.

The country had, in March 2012, honoured him with Padma Bhushan, the third highest civilian award of the country.