The Pakistan Supreme Court judgement disqualifying Nawaz Sharif from holding office of prime minister or remaining as an elected representative in Parliament has only helped to create a bigger void in Pakistan's governance and push the country into a deeper mess. 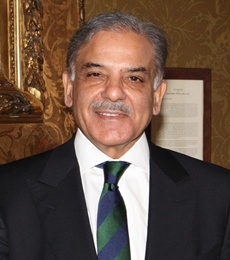 While leaders of the ruling Pakistan Muslim League-Nawaz (PML-N) proposed to bring in Nawaz Sharif's brother Shehbaz Sharif as the new prime minister, a Geo News report quoting lawmakers belonging to PML-N party said they saw no connection between the Panama Papers case and Sharif's ouster and that they planned to challenge the verdict.

While there are reports that Khawaja Asif could be made interim prime minister, Geo News said a name has not been announced yet to fill the 45 day vacuum until Shehbaz Sharif is elected to a National Assembly seat.

Chief minister of Pakistan's most populous province, Shehbaz is not a member of the National Assembly and will have to contest elections before he can be made prime minister.

An astute businessman and a powerful administrator, Shehbaz had held the position of Punjab CM earlier from 1997 to 1999 as well and had taken various initiatives with emphasis on health, education and environment.

Nawaz Sharif, known as the 'Lion of Punjab', became the prime minister of the politically unstable Pakistan for a record third time in 2013, after being forced to quit twice in the middle of his term - first by the presidency and then the military - and now by the judiciary.

This time, however, the Supreme Court ruling against him in the Panamagate case is a heavier blow to his career as the court has barred him from holding office or contesting elections for five years.

Nawaz Sharif's daughter Maryam, however, is optimistic, who on Friday asserted that her father's disqualification by the Supreme Court would not deter him from staging a comeback.

"Today will pave the way for Nawaz Sharif's resounding victory in 2018. He will be unstoppable. Insha'Allah. Rok sakte ho to rok lo (Stop him, if you can)!", she tweeted.

Reports say Nawaz Sharif's friendly overtures to India and India's prime minister made him a ''bad boy'' in Pakistan. Former Pakistan president Pervez Musharraf told CNN News18 that India's interference is not what the people of Pakistan wanted.

It is a historic day for Pakistan and he congratulated the Supreme Court for the verdict. He gave the credit to the chief justice of Pakistan, the five-judge bench and also to Imran Khan's movement.

''Today marks the end of Nawaz Sharif's career,'' he told News18. According to him, PML-N got only 13 per cent of the votes, which means that either 87 per cent didn't vote at all or voted for someone else.

Nawaz Sharif was disqualified because he failed to disclose income from Capital FZE in his nomination papers submitted for election in 2013.

Sharif, however, will remain the head of PML-N for all practical purposes and a puppet prime minister will be installed in Islamabad, unless the military intervenes to alter the status quo.

Nawaz Sharif will oversee the nomination of his successor who will then be rubber stamped in a parliamentary vote, where his party and coalition partners command a 209-seat majority in the 342-seat house

Nawaz Sharif's second term as prime minister from 1997 ended in 1999 when then powerful Army chief Pervez Musharraf staged a bloodless coup. He was jailed and then exiled. But, when Sharif himself ended up in jail, Sharif returned from exile in Saudi Arabia in 2007, when he teamed up with the PPP to force Musharraf from office.

It is said that it was Microsoft's Calibri fond that turned Nawaz Sharif's fortunes this time.

Nawaz Sharif's daughter, Maryam Nawaz is accused of document forgery in a corruption probe against the Sharif family. It was the Calibri fond that helped prove the forgery.

While Microsoft's Calibri font was used to type certified papers naming Maryam Nawaz as a trustee of several high-end flats in central London, the papers were dated a year before Calibri was in widespread commercial use, according to Al Jazeera.

"The properties, bought using offshore companies, are at the centre of a case against the Sharif family, with authorities and the opposition questioning the legitimacy of funds used to buy the apartments," the report said.

The Joint Investigation Team, looking into the case, found that the documents were dated February 2006.

The Supreme Court ordered that the cases against Nawaz Sharif and his family members be registered within six weeks and trial be completed within six months. The scandal is about alleged money laundering by Sharif in 1990s, when he twice served as prime minister, to purchase assets in London. The assets surfaced when Panama Papers leak last year revealed that they were managed through offshore companies owned by Sharif's children.

The assets include four expensive flats in London.

Finance minister Ishaq Dar and Captain Safdar, who is a member of the national assembly (MNA), also stood disqualified from office.

Pakistan Supreme Court's decision to remove Nawaz Sharif from office is likely to tighten the army's grip over the country which has been ruled by the all-powerful military for almost the half of its 69 years of existence as a sovereign nation.