Pakistan Prime Minister Nawaz Sharif has finally stepped down after the country's Supreme Court found him and his finance minister Ishaq Dhay guilty in the Panama Papers case. 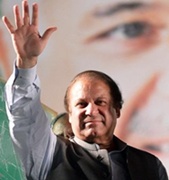 The Supreme Court verdict in the Panama Papers case also disqualified Prime Minister Nawaz Sharif for failing to disclose his un-withdrawn receivables constituting assets from UAE-based Capital FZE in his nomination papers for the 2013 elections.

Following the announcement of the verdict, Nawaz Sharif stepped down from the post of prime minister, a PML-N spokesman told Geo News.

Announcing their verdict in the Panama Papers case, all five judges ruled to send references against the premier, his children Maryam, Hussain and Hasan, son-in-law and finance minister Ishaq Dar to an accountability court.

The court ordered the National Accountability Bureau (NAB) to file a reference against the accused in an accountability court in six weeks and directed that the trial be completed in six months.

The Supreme Court order to disqualify Prime Minister Nawaz Sharif and finance minister Ishaq Dar required both of them to step down from their respective offices, Geo News quoted a PML-N spokesman as saying.

The five-judge bench unanimously ruled to send a reference against the premier, his three children and others to an accountability court.

The court ordered the National Accountability Bureau (NAB) to file a reference against the accused in an accountability court in six weeks and directed for the trial to be wrapped up within six months.

According to sources, Nawaz Sharif is chairing a meeting to decide on the appointment of a new premier.

Justice Ejaz Afzal Khan, who had headed the apex court's implementation bench following its 20 April order on the Panama Papers case, said the larger bench had unanimously held that Prime Minister Sharif is unfit for holding office and would also order an accountability court to open a case against him.

The unanimous judgement was announced shortly after 12 p.m. local time.

Justice Khan said the bench had recommended that all material collected by the joint investigation team (JIT) tasked with probing the Sharif family's financial dealings would be sent to an accountability court within six weeks.

Sharif expressed sorrow over the Supreme Court's decision, Geo News said quoting sources, adding that Sharif is likely to make the decision to appoint a new prime minister after consulting with legal experts.

Cabinet ministers, advisers and legal aides were present at the PM House where Sharif heard the verdict of the Panama Papers case.

PML-N leaders - before the verdict's announcement - stated that the government wants the Parliament to complete its tenure.

''It is hereby declared that having failed to disclose his un-withdrawn receivables constituting assets from Capital FZE Jebel Ali, UAE in his nomination papers filed for the General Elections held in 2013 in terms of Section 12(2)(f) of the Representation of the People Act, 1976 (ROPA), and having furnished a false declaration under solemn affirmation respondent No. 1 Mian Muhammad Nawaz Sharif is not honest in terms of Section 99(f) of Const. Ps. No. 29-30/2016 & 03/2017. 24 ROPA and Article 62(1)(f) of the Constitution of the Islamic Republic of Pakistan, 1973 and therefore he is disqualified to be a Member of the Majlis-e-Shoora (Parliament),'' the order read.

The bench also ordered the Election Commission of Pakistan to issue a notification declaring the prime minister's disqualification. The premier was said to be disqualified under Article 62 (1) (f) of the Constitution.

The bench also directed that the president should now begin the process of electing the new prime minister as per the law.