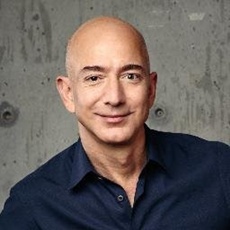 Amazon shares jumped 1.6 per cent at the start of trading on Thursday, boosting the net worth of Bezos - the company's founder and largest shareholder - by $1.4 billion, according to Forbes. The company's shares surged ahead of the online retailer's earnings report due later on Thursday.

Gates, 61, who has been holding the top spot among the world's wealthiest since May 2013, however, regained his position by afternoon as Amazon shares gave up much of the gain.

Amazon shares were down about 3 per cent in after-hours trading on Thursday after the retail giant reported that second-quarter profits fell short of analyst  expectations.

At $38 billion, Amazon's revenue continued to rise, far outstripping $30.4 billion in second quarter revenue a year ago and better than Wall Street's estimates of $37.2 billion.

With a market cap of over $500 billion Amazon recently joined other exclusive members of the $500-billion-plus club such as Alphabet, Microsoft and Apple.

Amazon stock was buoyed Analysts forecasts that the world's largest online retailer would report a 22-per cent spurt in second quarter sales at $37.2 billion, according to Reuters.

Amazon, which started off as an online bookseller, has gained from its diversification of business in the e-commerce sector to include cloud computing, electronics, fashion, foods and groceries, besides publishing and films. His online market has a worldwide presence.

The 'Everything Store', which has exclusive membership of an estimated 50 million, continues to add tens of millions of new Prime Members, helping the company to expand its online retail empire beyond groceries and apparel to Web services and cloud-computing that now has large government contracts and accounts for a sizable portion of its profits.