Indian origin Leo Varadkar to be Ireland's next prime minister

Indian origin Leo Varadkar, son of an immigrant Indian doctor is all set to become Ireland's next prime minister succeeding Enda Kenny, marking the next big change in a predominantly conservative country. 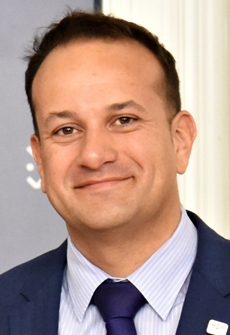 His election marks the next big change in the conservative Catholic  country that decriminalised homosexuality in 1993 and became the first country to adopt gay marriage via a popular vote in 2015.

Barring some unexpected development, Varadkar will be voted in as prime minister when parliament meets on 13 June and become the once-staunchly Catholic country's first openly gay premier and the youngest person ever to hold the office.

Varadkar, son of immigrant Indian doctor Ashok Varadkar and Irish nurse Miriam and himself a doctor, was born and raised in Dublin and worked as a general practitioner before winning a seat in the Parliament in 2007.

Leo Varadkar made his foray into Irish politics when he was 22 and was elected to the parliament when he was 27. At 36, He declared himself a gay when he was 36 and finally, at the age of 38, is on course to become Ireland's next prime minister.

He announced his campaign to succeed Taoiseach Enda Kenny shortly after Kenny announced he would be stepping down from the post earlier this month.

Kenny has been prime minister of Ireland since 2011 and leader of the ruling Fine Gael party since 2002. Varadkar was not even born when Kenny, 66, was first elected as a member of parliament.

Leo Varadkar's father, Ashok Varadkar, who moved to Ireland from India in the 1970s, to call one of Western Europe's most socially conservative countries home, he must never have dreamt that his youngest child will one day become prime minister of the once-staunchly Catholic country.

"If somebody of my age, of my mixed race background and of all the things that make up my character can potentially become leader of our country, then I think that sends out a message to every child born today that there is no office in Ireland that they can't aspire to," Varadkar told Newstalk radio this week.

"If my election today shows anything, it is that prejudice has no hold in this Republic," Varadkar said to huge applause in a speech at Dublin's Mansion House, where Ireland's parliament first sat almost a century ago.

"I know when my father travelled 5,000 miles to build a new home in Ireland, I doubt that he ever dreamed that one day his son would grow up to be its leader and despite his differences, his son would be judged by his actions not his identity.

"Every proud parent in Ireland today can dream big dreams for their children," Varadkar said.

While local media barely mentioned Varadkar's gay credentials, one former government minister commented that the process of his elevation to the prime minister's office came "without anybody batting an eyelid" shows just how far Ireland has come.

"He's a once-in-a-generation politician," said Fine Gael member of parliament Jim Daly, echoing the comments of most of his colleagues who have placed high hopes in Varadkar.

Varadkar would be one of two openly gay heads of state currently in office - Luxembourg's prime minister Xavier Bettel being the other.

He will also be a year younger than France's Emmanuel Macron when he attends his first EU leaders summit later this month. But, Varadkar himself pointed out, Sebastian Kurz, the favourite to become Austria's new prime minister, is eight years younger.