Iranian voters turned out in massive numbers to emphatically re-elect reformist President Hassan Rouhani, giving him a comfortable victory over hardline challenger Ebrahim Raisi as they showed their preference for more freedom at home and less isolation abroad. 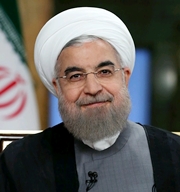 With almost all votes counted, Rouhani had an insurmountable lead with 22.8 million votes compared to 15.5 million for Raisi, the state election committee said. Iranian state television also congratulated him on his victory.

A huge turnout on Friday - estimated at more than 40 million out of 56 million registered voters - led to the vote being extended by several hours to deal with long queues.

"I congratulate the great victory of the Iranian nation in creating a huge and memorable epic in the continuation of the path of 'wisdom and hope'," tweeted Vice President Eshaq Jahangiri, referring to the government's slogan.

Rouhani, 68, is a relatively moderate cleric who forged the 2015 nuclear deal with world powers. He had described the election as a choice between greater civil liberties and "extremism".

Hardline judge Raisi, 56, had positioned himself as a defender of the poor and called for a much tougher line with the West. He targeted working-class voters hit by high unemployment and austerity measures, as well as those who worry that the values of the 1979 revolution are under threat.

But voters seem to have backed Rouhani's efforts to reach out to the world, throwing down a challenge to the conservative clergy that still holds ultimate sway.

The architect of Iran's still-fragile detente with the West, Rouhani led with 58.6 per cent of the vote, compared with 39.8 per cent for his main challenger, hardline judge Ebrahim Raisi, according to near-complete results broadcast today.

Although the powers of the elected president are limited under unelected Supreme Leader Ayatollah Ali Khamenei who outranks him, the scale of Rouhani's victory gives the pro-reform camp a strong mandate.

Rouhani's opponent Raisi was a protege of Khamenei, tipped in Iranian media as a potential successor for the 77-year-old supreme leader who has been in power since 1989.

The re-election is likely to safeguard the nuclear agreement Rouhani's government reached with global powers, under which most international sanctions have been lifted in return for Iran curbing its nuclear programme.

It is also a setback to the Revolutionary Guards, the powerful security force which controls a vast industrial empire in Iran, which had thrown its support behind Raisi to safeguard its interests.

Nevertheless, Rouhani stills faces the same restrictions on his ability to transform Iran that prevented him from delivering substantial social change in his first term and thwarted reform efforts by one of his predecessors, Mohammad Khatami.

The supreme leader has veto power over all policies and ultimate control of the security forces. Rouhani has been unable to secure the release of reformist leaders from house arrest, and media is barred from publishing the words or images of his reformist predecessor Khatami.

The re-elected president will also have to navigate a tricky relationship with Washington, which appears at best ambivalent about the nuclear accord signed by former US president Barack Obama. President Donald Trump has repeatedly described it as "one of the worst deals ever signed", although his administration re-authorised waivers from sanctions this week.

Trump arrived on Saturday in Saudi Arabia, his first stop on the first trip abroad of his presidency. The Saudis are Iran's biggest enemies in the region and deplore the nuclear deal.

Moreover, Trump is expected to denounce Iran in his Riyadh speech for contributing to the spiralling violence in Syria.

Despite the removal of nuclear-related sanctions in 2016, foreign companies have largely kept away from investing in Iran, limiting the economic benefits so far.