WikiLeaks founder Julian Assange gave a clenched fist salute from the balcony of the Ecuadorean embassy in London on Friday after Swedish prosecutors dropped seven-year-old rape charges, but he insisted the ''proper war'' over his future was just beginning. 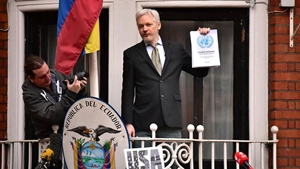 The dropping of charges by Sweden does not exactly make Assange a free man, as he still faces immediate arrest if he steps out of the embassy premises.

Stepping into the daylight on the balcony the embassy where he has been holed up since 2012 to celebrate, he said the battle was ''far from over''.

The woman who has accused the 45-year-old Australian of rape was reportedly angered by the Swedish decision.

Assange declined to say whether he would leave the embassy. British police could arrest him immediately for breaching earlier bail conditions if he left the building, while US authorities have warned they regard WikiLeaks as a ''hostile intelligence service''.

''Today is an important victory,'' Assange, in a black shirt and jacket, told reporters and a small band of supporters crowded around the tiny balcony. ''But it by no means erases seven years of detention without charge. In prison, under house arrest and almost five years here in this embassy without sunlight. That is not something that I can forgive. It is not something that I can forget.''

Earlier in Stockholm, Marianne Ny, Sweden's director of public prosecutions, said the rape investigation had been dropped because there was ''no reason to believe that the decision to surrender him to Sweden can be executed in the foreseeable future''.

''It is no longer proportionate to maintain the arrest of Julian Assange in his absence,'' she said.

Assange jumped British bail by entering the embassy and claiming asylum, saying he feared he would eventually be extradited to the United States.

US justice authorities have never confirmed that they have Assange under investigation or are seeking his extradition. But US Attorney-General Jeff Sessions said in April 2017 that ''we will seek to put some people in jail'', when asked if arresting Assange was a ''priority'' for Washington.

''The road is far from over. The war, the proper war is just commencing,'' Assange said, noting his lawyers were in touch with British authorities and hoped to begin a dialogue about the ''best way forward''.

''Ecuador will now be intensifying its diplomatic efforts with the UK so that Julian Assange can gain safe passage in order to enjoy his asylum in Ecuador,'' the country's foreign minister Guillaume Long wrote in a statement.

Assange's Swedish lawyer, Per Samuelsson, said his client plans to move to Ecuador because ''it's the only nation where he is safe''.

The US Department of Justice said on Friday it had no comment on Assange.

In Australia, his mother Christine Assange urged the Canberra government to provide him with a new passport so he could leave Britain.

''For the UK now to continue to keep him in that embassy, when he's uncharged and the warrant has expired, is now breaching his human rights severely and is almost criminal,'' she said.

In Sweden, Assange's accuser was left stunned by the prosecutors' decision.

''It is a scandal that a suspected rapist can escape justice and thereby avoid the courts,'' her lawyer, Elisabeth Fritz, told AFP in an email.

''My client is shocked and no decision to (end the case) can make her change (her mind) that Assange exposed her to rape,'' she said.

The accusation against  Assange dates from August 2010 when the alleged victim, who says she met him at a WikiLeaks conference in Stockholm a few days earlier, filed a complaint.

She accused him of having sex with her - as she slept - without using a condom despite repeatedly having denied him unprotected sex.

Assange has always denied the allegations, which he feared would lead to him being extradited to face trial over the leak of hundreds of thousands of secret US military and diplomatic documents in 2010, that brought WikiLeaks to prominence.

Assange stays in a red-brick flat at 3 Hans Crescent, which houses the Ecuadorean embassy, and continues his work with WikiLeaks. His room, which measures 190 sq feet, has a bed, computer, sun lamp, treadmill and a microwave, and he has a cat for company.