Girl apparently raised by monkeys 'rescued' from UP forest

In a development that seems straight from Rudyard Kipling's Jungle Book, police in Uttar Pradesh have found a girl who can neither speak nor behaves like normal human beings. The girl, aged between eight and 10, was rescued by the police in Bahraich from a troop of monkeys. 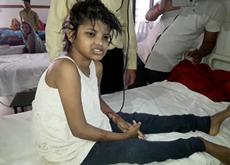 The girl was spotted a few weeks ago by sub-inspector Suresh Yadav, who was on a routine patrol in Motipur range of Katarniaghat Wildlife Sanctuary, according to The Times of India. However, the BBC and Associated Press say she was first spotted by villagers who were out cutting wood, and who alerted the cops.

Indeed the foreign media seemed generally better informed about the matter than its Indian counterparts – ToI actually referred to the girl's simian companions as 'apes', even tough monkeys and apes belong to different families and there are no apes found in India.

Sub-inspector Yadav said the monkeys attacked his squad when they came to take the girl away.

When he tried to rescue the girl, who seemed to be comfortable with the monkeys, they screeched at him and so did the girl. However, the cops after great effort managed to get hold of the girl and got her admitted to a district hospital.

Police are searching lists of missing children to try to identify a girl believed to have been living with the monkeys.

Doctors said she could not communicate and displayed "monkey-like" traits.

A senior police official told BBC Hindi she had been playing with a pack of monkeys and imitating their behaviour when police went to rescue her.

Doctors said she was malnourished when she was brought in, with long hair and nails, and wounds on her body. She was also unable to communicate but would screech and initially walked on all fours. Also, she ate directly with her mouth instead of first taking the food in her hands.

Her condition is said to be much better now, though doctors say she often gets violent. In the long term she is expected to be handed over to child welfare agencies and other medical specialists to slowly reintroduce her to the world.

The hospital's chief medical officer, D K Singh, told BBC Hindi that although she was still in hospital, she would be transferred to the Lucknow Medical College once she had been given a clean bill of health so that she could get better medical care.

Local district magistrate Ajaydeep Singh has also visited the girl in hospital and has named her "Forest Durga", a reference to a Hindu warrior goddess.

Many in India are comparing the little girl to Mowgli, the character from Rudyard Kipling's Jungle Book who was raised by wolves. It is not clear, however, how long the little girl has been living in the forest.