Panneerselvam revolts, says he was forced out as Tamil Nadu CM

O Panneerselvam, who recently resigned from his post as Tamil Nadu chief minister to make way for V K Sasikala to take over reins, has finally raised the banner of revolt saying that he was forced to resign as chief minister and that he is ready to withdraw his resignation if the party and the people wish so. 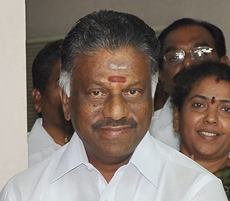 He also vowed to ensure that his mentor J Jayalalithaa's will is fulfilled in choosing a leader for the state who would be the choice of the Tamil people, even if it is a lone fight.

After making a surprise visit to the late leader's burial site late last night and sitting alone in mediation, he said he would withdraw his resignation and continue as chief minister if the people and party cadre wanted him to.

''Someone chosen by the grassroots cadre should be the general secretary; one acceptable to the people should be the chief minister. I am prepared to stand alone and fight on this, I am ready for it,'' said Panneerselvam, addressing the media on Tuesday night.

Panneerselvam's open challenge to the choice of VK Sasikala as Tamil Nadu's chief minister highlights the growing rift within the AIADMK and the wider resentment outside the party.

Panneerselvam made a surprise visit to J Jayalalithaa's burial site late Tuesday, sitting alone in mediation, paying respects, and staging a silent protest against the imminent swearing-in of Sasikala on Thursday.

Addressing the media later in the night, he said he may withdraw his resignation if the "people and AIADMK party cadres wish."

"There are some truths that I want to tell to my party cadre and to the people of this country. I have performed my duty without any shortcomings and carried forward path shown by Amma," ANI reported him as saying.

"When she (Jayalalithaa) was in the hospital, she (asked me to take over as chief minister. I was told that I have to save the party and the state. I was given the post but was then insulted continuously," the interim CM said.

Panneerselvam said he is driven by "Amma's soul" and his own conscience to reach let the people of the state know the truth about the sequence of events that followed Jayalalithaa's illness, and the subsequent elevation of VK Sasikala to the post of general secretary.

"Amma was admitted to Apollo hospital and her condition worsened after 70 days. They (Sasikala and her family) came to me and said we have the duty to protect the party and government. I told them that Amma is under treatment. In (Jaya's absence) alternate arrangements should be made for general secretary and chief minister posts. They asked me to take over as chief minister and said Madhusudanan will become the general secretary. I did not accept that," a New Indian Express report quoted him as saying.

Panneerselvam said he was offered the CM's post twice by Jayalalithaa but he had declined and that when Sasikala and her ilk kept insisting, even as Jayalalithaa's condition worsened, that if someone other than Sasikala is chosen for the post it will bring ill-repute to the party, he was forced to accept.

"Within two-three days, health minister Vijaya Baskar met me. Sasikala's brother Divakaran had told him that he wished to take her sister Sasikala to their native place. When I enquired further, he revealed that Divakaran and others wished to make Sasikala the general secretary. Since this was contrary to the earlier choice of Madhusudanan, I consulted with senior ministers at my residence. They also agreed to the idea of making Sasikala the general secretary. Later, general council elected her to the post," he added.

Panneerselvam said the deputy speaker of Lok Sabha, M Thambidurai, wanted to meet Prime Minister Narendra Modi with 50 of his party MPs. Panneerselvam brought this to the notice of Sasikala. Soon after, revenue minister RB Udhayakumar made a public statement that the post of general secretary and chief minister should be both held by Sasikala.

Panneerselvam also claimed that he was not allowed to meet Jaya once even after visiting the hospital daily.

Panneerselvam's outburst could change the course of the politics in the state as he is now effectively the caretaker chief minister of the state till Sasikala is sworn in, and according to reports, Governor C Vidyasagar Rao is in no hurry to respond immediately to Sasikala's claim.