Mulayam Singh Yadav has averted catastrophe for his Samajwadi Party by revoking the expulsion of Uttar Pradesh chief minister Akhilesh Yadav and party secretary Ram Gopal Yadav averting a show of strength by rival factions led by himself and son Akhilesh. 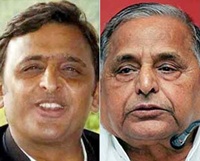 True to his name, Mulayam Singh remained soft at meetings convened to broker peace between the son and the father soon after the decision to expel the two were announced and both factions drew up battle lines.

The Samajwadi Party also removed the expulsion letters of both Akhilesh and Ramgopal from its website.

''As per the directions of Netaji (Mulayam Singh Yadav), the expulsion of Akhilesh Yadav and Ramgopal Yadav has been revoked with immediate effect,'' Samajwadi Party leader Shivpal Singh Yadav tweeted.

It also seems there is some compromise on the list of candidates for the coming elections. Shivpal, who backs brother Mulayam Singh Yadav, also said that a new list of party candidates would be discussed and released later.

It was a sort of climb-down for the Mulayam camp as a meeting of party MLAs held earlier by the chief minister saw almost 200 legislators turn up, signalling that Akhilesh enjoyed the support of a majority of party legislators

On the other hand, a poor turnout at a meeting called by the Mulayam camp forced cancellation of the meeting and urban development minister Azam Khan, who is one of the founding members of the party and the go-between in the conciliation effort, opted to broker peace.

At the meeting, Akhilesh reportedly touched Mulayam's feet and said he wanted to gift him an electoral victory in the state.

''The two got emotional and the stage was set for Akhilesh's return to the Samajwadi Party fold,'' IANS quoted a source as saying.

Mulayam reportedly was reluctant to take back cousin Ramgopal Yadav, but yielded after persuasion by his son.