US president-elect Donald Trump plans to nominate South Carolina Governor Nikki Haley (born Nimrata Nikki Randhawa) as United Nations ambassador and has offered the job of education secretary to Betsy DeVos, an advocate for school choice, while the post of housing secretary will go to former political rival Ben Carson. 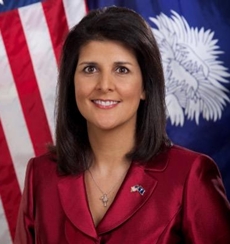 Haley, 44, the daughter of Indian immigrants -and the first woman to be elected governor of South Carolina, backed two of Trump's opponents during the Republican primary campaign.

Trump's transition office on Wednesday morning announced his plan to nominate her and on a subsequent call with reporters said another Cabinet-level pick could be coming later in the day.

Haley and the president-elect had "a natural chemistry" when they met in the days after the election, Trump spokesman Jason Miller said. "It was a pretty easy pick."

DeVos, 58, has been active in Republican Party politics for decades in her home state of Michigan and in education advocacy. She's chairwoman of the American Federation for Children, which backs vouchers and tax credits to give parents choices for schools. She's on the board of directors of the Foundation for Excellence in Education, founded by former Florida Governor Jeb Bush.

After Trump and vice president-elect Mike Pence met with DeVos in New Jersey on Saturday, their transition office said in a statement that the discussion "was focused on the Common Core mission, and setting higher national standards and promoting the growth of school choice across the nation."

Carson, 65, is a retired neurosurgeon who sought the 2016 Republican presidential nomination before becoming an informal adviser to Trump. He's never held elected office. Two people familiar with the matter confirmed to Bloomberg that Trump had offered Carson the job, after Carson said Tuesday on Fox News that it was one of several options he would consider over the Thanksgiving holiday.

"I feel that I can make a significant contribution particularly to making our inner cities great for everyone," Carson said in a Facebook posting, adding that "an announcement is forthcoming about my role".

Trump is in Florida for Thanksgiving as he and his team work to fill thousands of administration jobs before his January inauguration. He has already announced his choices for national security adviser, attorney general, and CIA director, while other major posts including secretaries of state, defence and the treasury remain unfilled.

Limited experience
Haley has limited foreign policy experience. The daughter of Indian Sikh immigrants, Haley won a seat in South Carolina's House of Representatives in 2004. During her first run for governor, in 2010, she won an endorsement from former vice presidential candidate Sarah Palin. She was re-elected in 2014.

In a statement, Haley said she was accepting Trump's offer out of a "sense of duty".

"When the president believes you have a major contribution to make to the welfare of our nation, and to our nation's standing in the world, that is a calling that's important to heed," she said.

Haley took at least eight trips abroad as governor, including to Germany, Sweden, France, the UK, Japan, Canada, and India, mostly to attend trade shows and seek economic development opportunities in the automotive and aerospace industries, according to the Post and Courier newspaper, which first reported her nomination.

Matthew Rycroft, the UK's ambassador to the UN, praised Haley in a statement on Wednesday.

"She will bring to the UN a strong track record of achievement from South Carolina, and I know that the UK-US relationship will continue to go from strength to strength," Rycroft said.

The governor's national profile rose in 2015, when she had to deal with the aftermath of the killing of nine people at Charleston's historically black Emanuel AME church in a racially motivated attack. A month later, her decision to support legislation ordering the removal of the Confederate flag from the Statehouse grounds won bipartisan praise nationally, though it was more controversial at home.

"That flag, while an integral part of our past, does not represent the future," Haley said. "By removing a symbol that divides us, we can move forward as a state in harmony."

In the 2016 presidential race, Haley supported Florida Sen Marco Rubio and urged Trump to release his tax returns, a move he has yet to make. After Trump tweeted, "The people of South Carolina are embarrassed by Nikki Haley," she responded with a tweet of her own to Trump: "Bless your heart." After Rubio dropped out, Haley switched her support to Sen Ted Cruz.

Haley was born in Bamberg, South Carolina, according to her official biography. At 13, her first job was keeping the books for her family's clothing store. She earned a degree in accounting from Clemson University.

Her nomination will require Senate confirmation. As US ambassador to the UN, she would have to champion a Trump foreign policy that has at times been enigmatic if not contradictory. Trump has suggested the US should have a better working relationship with Russia to fight terrorism in Syria, said he might recognize Moscow's annexation of Crimea and warned that Washington might not defend NATO allies who don't "pay their fair share".

She would succeed Samantha Power, who won a Pulitzer Prize for a book citing a moral duty to prevent genocide but had to defend before the world body Obama's reluctance to intervene in Syria's deadly civil war.