China's Xi elevated to the ranks of Mao and Deng Ziaoping 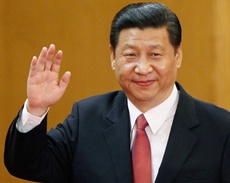 The announcement made at the close of a four-day closed-door meeting of senior party functionaries in Beijing, however, emphasised the importance of collective leadership, signalling that Xi will not enjoy absolute power.

In fact, the lengthy communique, released through the state media, insisted on the collective leadership system, saying it "must always be followed and should not be violated by any organisation or individual under any circumstance or for any reason."

At the same time, the party has warned against dissent, saying that all party members should "closely unite around the Central Committee with Comrade Xi Jinping as the core", said the document.

The "core" leader title marks a significant strengthening of Xi's position ahead of a key party congress next year, at which a new Standing Committee, the supreme authority in China, will be constituted.

Xi, who already controls the armed forces as head of the Central Military Commission has been cosolidating power assuming the charge of commander-in-chief of the military and heading a group leading economic reform.

It was Deng Ziaoping who coined the phrase "core" leader for Mao, Jiang Zemin and himself, meaning they had almost absolute authority and should not be questioned.

The ''core'' leader status will stand by Xi during the party congress due to be held in the second half of 2017, enabling him to dictate terms and stack the Standing Committee with his ''core'' supporters.

While head of the party, the military and the state had not thought of giving  Xi the title of "core" leader, Xi's immediate predecessor, Hu Jintao, was also never called the "core".

As per past precedent, Xi should step down at the 2022 party congress after a decade at the top, but speculation in rife that the ''core'' leader title is intended to overcome that bump.