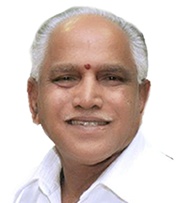 CBI had, in October 2015, filed charges against the four, a Bellary-based private steel company and a Shimoga-based trust run by the family of Yeddyurappa for alleged abuse of official position and corruption.

Judge RB Dharmagouder in his judgement also exonerated nine other accused in the kickback case, which had cost Yeddyurappa his chief ministership in 2011, following indictment by the then Lok Ayukta Santosh Hegde.

Yaddyurappa, who is now the state BJP president tweeted, ''Justice is done, I stand vindicated.'' He also thanked those who stood by him during his tough time. "Satyameva Jayate." he added.

Later, an elated Yeddyurappa told reporters that he ''had faith in God that I would get justice and I have been rewarded.''

"I am happy that false allegations and politically motivated charges have been dismissed," the state BJP strongman, who has returned as the state BJP chief earlier this year, said.

He said the court verdict had come as a ''new fillip'' to him and lakhs of BJP workers to strive for bringing the party back to power in Karnatak in the next assembly polls.

Yeddyurappa was indicted for colluding in illegal iron-ore mining in the mineral-rich district of Bellary in August 2011. He also had to spend about three weeks in jail in October 2011 in connection with the case before he was granted bail.

CBI had charged the four with criminal conspiracy, cheating, forgery, and corruption, according to the CBI charge sheet, which had alleged involvement of Rs40 crore kickbacks, including Rs20 crore allegedly paid to a trust run by the Yeddyurappa's family, for granting favours, including mining licences, during his chief ministership.

He was forced to resign as chief minister in 2010 after a Lokayukta report on illegal mining named him as one of the guilty parties.

The Lokayukta cases were subsequently quashed by the higher courts on various grounds, including the fact that sanctions granted for Yeddyurappa's prosecution were not in order.

The CBI case was registered against Yeddyurappa and others at the instance of the Supreme Court following a plea filed by an NGO the Samaj Parivartan Samudaya against widespread illegal mining activities in Karnataka in the 2008-2010 period. The CBI's case was considered to be strong.

The CBI had alleged that an affiliate of the beneficiary JSW Steel had paid Rs20 crore  to the Prerana Educational Trust run by Yeddyurappa's sons B Y Raghavendra and B Y Vijayendra and an additional Rs20 crore were deposited in the individual bank accounts of the sons and son-in-law in 2010 when Yeddyurappa was the chief minister.