The Nobel Peace Prize for 2016 has been awarded to Colombian President Juan Manuel Santos ''for his resolute efforts to bring the country's more than 50-year-long civil war to an end, a war that has cost the lives of at least 220 000 Colombians and displaced close to six million people. 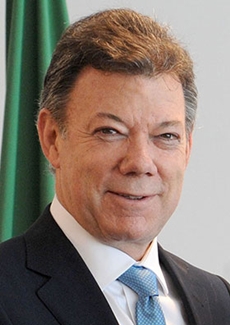 ''The award should also be seen as a tribute to the Colombian people who, despite great hardships and abuses, have not given up hope of a just peace, and to all the parties who have contributed to the peace process. This tribute is paid, not least, to the representatives of the countless victims of the civil war,'' the Norwegian Nobel Committee stated in a release.

President Santos initiated the negotiations that culminated in the peace accord between the Colombian government and the FARC guerrillas, and he has consistently sought to move the peace process forward, which, he knew, was controversial.

But in referendum, Columbian voters rejected the accord - a narrow majority of the over 13 million Colombians who cast their ballots said ''no'' to the accord. There was a real danger that the peace process would come to a halt and that civil war would flare up again.

But that did not deter Santos who kept regular contact FARC guerrilla leader Rodrigo Londońo asking him to continue to respect the ceasefire.

''The fact that a majority of the voters said no to the peace accord does not necessarily mean that the peace process is dead. The referendum was not a vote for or against peace. What the "No" side rejected was not the desire for peace, but a specific peace agreement. The Norwegian Nobel Committee emphasizes the importance of the fact that President Santos is now inviting all parties to participate in a broad-based national dialogue aimed at advancing the peace process. Even those who opposed the peace accord have welcomed such a dialogue. The Nobel Committee hopes that all parties will take their share of responsibility and participate constructively in the upcoming peace talks.

Striking a balance between the need for national reconciliation and ensuring justice for the victims will be a particularly difficult challenge. There are no simple answers to how this should be accomplished. An important feature of the Colombian peace process so far has been the participation of representatives of civil war victims. Witnessing the courage and will of the victims' representatives to testify about atrocities, and to confront the perpetrators from every side of the conflict, has made a profound impression.

''By awarding this year's Peace Prize to President Juan Manuel Santos, the Norwegian Nobel Committee wishes to encourage all those who are striving to achieve peace, reconciliation and justice in Colombia. The president himself has made it clear that he will continue to work for peace right up until his very last day in office. The Committee hopes that the Peace Prize will give him strength to succeed in this demanding task. Furthermore, it is the Committee's hope that in the years to come the Colombian people will reap the fruits of the ongoing peace and reconciliation process. Only then will the country be able to address effectively major challenges such as poverty, social injustice and drug-related crime.

''The civil war in Colombia is one of the longest civil wars in modern times and the sole remaining armed conflict in the Americas. It is the Norwegian Nobel Committee's firm belief that President Santos, despite the "No" majority vote in the referendum, has brought the bloody conflict significantly closer to a peaceful solution, and that much of the groundwork has been laid for both the verifiable disarmament of the FARC guerrillas and a historic process of national fraternity and reconciliation. His endeavors to promote peace thus fulfil the criteria and spirit of Alfred Nobel's will.