Yoga guru Baba Ramdev-led Patanjali has become a household name and is also considered the fastest growing FMCG brand of the country. However, Baba Ramdev is only the face of Patanjali because 94 per cent of the brand is owned by its chief executive Acharya Balakrishna. 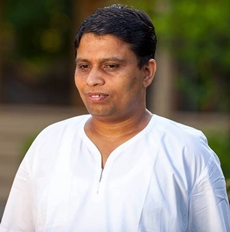 And now, Balakrishna has made it to the Hurun India Rich List surpassing the Essar's Ruia brothers and Nusli Wadia of Britannia.

Hurun report is a research unit based in China. It began operations in India in 2012.

Hurun India Rich List reports, "Yoga Acharya's Patanjali took the market by storm and is eating away market share of other multinational FMCG's. Patanjali registered a turnover of Rs5,000 crore and expects to hit Rs10,000 crore in 2017."

Balakrishna prefers to dress in traditional attire like dhoti and kurta and his birthday on 4 August is celebrated as 'Jadi Booti Divas' (Herb Day) in the Patanjali family. He is considered a close confidante of Baba Ramdev. He uses an iPhone but does not have a personal computer.

Patanjali is fast expanding with food units in Nagpur, Maharashtra, and a proposed plant for rice-based food products, including fast moving consumer goods, rice bran oil, packaged rice and other products in Bengal.

Patanjali, which has a mother plant for ayurvedic products in Haridwar, has already identifiied Guwahati as a site for one of the six ayurvedic plants being set up across the country to meet rising demand.