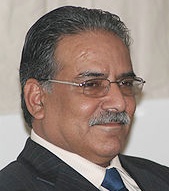 Nepal's parliament on Wednesday elected a former Maoist rebel chief Pushpa Kamal Dahal (Prachanda) as the prime minister after K P Oili on Wednesday decided to resign rather than face defeat in a vote of no confidence.

He becomes the 24th prime minister of Nepal in 26 years since the Himalayan nation adopted multi-party democracy in 1990 and the eighth since the 239-year-old monarchy was abolished eight years ago.

Pushpa Kamal Dahal, 61, who led a decade-long insurgency that toppled a Hindu monarchy,

Prachanda who said he would maintain balanced relations with the two neighbours - India and China - was greeted by both. Indian Prime Minister Narendra Modi extended an invitation for an official visit soon while Chinese ambassador Wu Chuntai presented the new PM with a bouquet, assuring continued support and good will.

Prachanda said he was chosen by history to work for country.

Just before the parliament took up the election, leaders of the three parties - Maoists, Nepali Congress and Madhesi groups - signed a three-point agreement promising that the issues of Madhesis would be addressed with utmost sincerity, taking all sides together, and through constitutional amendment wherever necessary. But the votes that Prachanda secured on Wednesday does not guarantee a two third majority, something required for the amendment.

President Bidhya Devi Bhandari will administer oath of office and secrecy to Pachanda on Thursday.