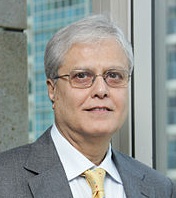 Ace investment banker and one of India's most successful deal makers Nimesh Kampani on Tuesday announced his exit from executive roles at J M Financial group. His son Vishal will succeed him as managing director.

After steering JM Financial for 43 years, Kampani will relinquish his executive role from September-end when he turns 70 and become its non-executive chairman. Vishal Kampani, 39, will take charge as managing director.

JM Financial, which was founded in 1973 with a capital of Rs5,000 has a current market value of about Rs5,300 crore while Kampani himself emerged as one of the most successful business advisers in India.

"I believe that it is important for all businesses to implement a proper succession plan and I am committed to following the same. Vishal will lead the group strategy in his position as MD of the holding company. The board will continue to remain actively engaged with the business as always with continued focus on value-based and compliant business practices for calibrated growth. All the business unit leaders will work closely with Vishal," the senior Kampani said on Tuesday.

The man who brokered the division of Reliance Industries between the Ambani brothers, took TCS and Bharti public, helped the government raise $2.4 billion by part selling crown jewel ONGC, got Ratan Tata, Kumar Birla and US giant AT&T to stitch up a mega telecom alliance besides negotiating a deal between drinks major Diageo and Vijay Mallya, will now mostly pursue social work, JM said.

Vishal, who in 2008 diversified the dealmaking business into other streams like lending, was appointed by the board to take over as managing director from 1 October.

Vishal has been associated with the business for nearly two decades and the non-investment banking part of the business driven by him delivers nearly 70 per cent of the revenues.

JM Financial is also present in wealth management, equity brokerage and asset reconstruction, among others.

Earlier this year, the group had announced a tie-up with ex-Citigroup chief executive Vikram Pandit to start real estate lending.

The JM Financial group on Tuesday reported a 19 per cent rise in June quarter net at Rs86.09 crore on the back of a 24 per cent increase in revenue to Rs475.43 crore.