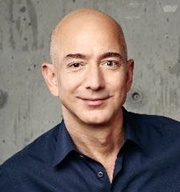 Amazon chief and founder, Jeff Bezos has become the world's third richest person, thanks to the company's robust earnings and an uptick in the stock.

Bezos owns 18 per cent of Amazon's shares, which were up 2 per cent in trading on yesterday. Bezos's fortune had been estimated at $65.3 billion by Forbes.

Forbes estimates that Bezos's fortune was only surpassed by Microsoft founder Bill Gates, worth $78 billion and the $73.1 billion fortune of Zara founder Amancio Ortega.

Amazon, which had gained a reputation for announcing little or no profit each quarter, had, since last year, hit a turning point and had seen improved earnings since.

"It's been a busy few months for Amazon around the world, and particularly in India - where we launched a new [Amazon Web Services] Region, introduced Prime with unlimited free shipping, and announced that Prime Video is coming soon, offering Prime members in India exclusive access to Amazon Original Series and Movies - including original content featuring top Indian creators and talent," said Bezos, BBC News reported.

Amazon posted profit at $1.78 per share as against analysts' projection of $1.11 per shares. Revenue growth in the second quarter came in at 31 per cent  to $30.4 billion, beating analyst estimates by $900 million.

He was still $9 billion behind Buffett, at the time but since then Amazon stock had risen 24 per cent as of markets close yesterday, while Berkshire Hathaway stock had dropped 2 per cent. Also, Buffett's annual charitable donation in mid-July, lowered his net worth by $2.9 billion.