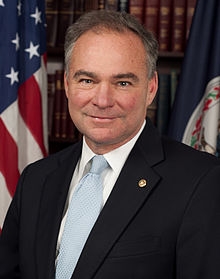 Kaine, 58, a former Virginia governor, Richmond mayor and Democratic National Committee chairman, was chosen after a search that included riskier and more unconventional candidates who offered greater appeal to the party's liberal base, according to The Washington Post.

He was a long-time favourite to become Clinton's running mate, in part because of the political and personal attributes she considers well-suited to the governing partnership she seeks - and in part because of the calculation that the experience of a Clinton-Kaine ticket would outgun Trump's outsider bombast.

Clinton notified supporters of her selection in a text message. "I'm thrilled to tell you this first," the text read. "I've chosen Sen Tim Kaine as my running mate. Welcome him to my team."

Kaine, who was in Rhode Island for a long-scheduled fundraising party, responded to the selection with a Twitter message: "Just got off the phone with Hillary. I'm honored to be her running mate. Can't wait to hit the trail tomorrow in Miami!"

Kaine is not known for his charisma on the campaign trail; he has called himself the "happy senator" and even "boring" - and Clinton laughingly agreed in a PBS interview earlier this week.

"I love that about him," she said on Monday. "He's never lost an election. He was a world-class mayor, governor and senator, and is one of the most highly respected senators I know."

Along with his image as a low-key workhorse, Kaine brings legislative experience in the Senate and executive experience as a popular if unremarkable governor. He comes from a battleground state, albeit one widely considered winnable for Clinton whether Kaine is on the ticket or not.

Clinton has said that her most important criterion was the ability to step into the presidency at any moment. She also sought a running mate who would be able to work with Republicans to advance an ambitious legislative agenda that includes immigration reform and new gun-control measures, her campaign said.

Kaine's affable, regular-guy presence may also help balance the perception of Clinton as remote, chilly and privileged. She is among the least-liked major party candidates in decades, according to public opinion polls, behind only Trump.

Clinton's choice comes as she and the Democratic Party prepare for a four-day convention that will showcase her resume and experience. It's a counterpoint to what Democrats say is Trump's lack of credentials.

With Kaine, Clinton hopes to focus the election even more squarely on the question of preparation and ability. Kaine comes from the same moderate wing of the party and shares Clinton's governing philosophy. They share a basic ideology that government can do good and that the United States should be both a moral actor and an engaged diplomatic and military presence overseas.

She is also counting on him to be a partisan attack dog somewhat in the model of Vice President Joe Biden.

Trump focused intensely on Clinton during his speech in Cleveland on Thursday accepting the Republican nomination, calling her corrupt and incompetent and accusing her of making the country less safe as secretary of state.

Even before it was announced, Kaine's pick was panned by several liberal groups, including some with ties to Sen Bernie Sanders of Vermont, the runner-up in the Democratic primaries.

In recent television interviews, Sanders has praised Kaine, but some of his supporters have sharply questioned his progressive bona fides, pointing to Kaine's support of trade deals and regulations favourable to big banks.

Charles Chamberlain, executive director of the activist network Democracy for America, which backed Sanders in the primaries, said Thursday that it should be "disqualifying" for any potential Democratic vice-presidential nominee to "help banks dodge consumer protection standards."

And, on Friday, Norman Solomon, the coordinator of a group billing itself as the Bernie Delegates Network, called Kaine "a loyal servant of oligarchy".

Kaine was in New England on Friday afternoon attending a pair of fundraisers, one in Boston to benefit his Senate campaign account and another in Rhode Island on behalf of Sen Jack Reed, a fellow Democrat.

Kaine did not share anything about the status of the search on Friday with reporters who staked out his home in Richmond, Virginia, or caught up with him at Logan Airport in Boston.

Clinton, meanwhile, was making several campaign stops in Florida on Friday. She began in Orlando, a city which is still reeling from a terror attack at a gay nightclub that left 49 people dead.

She was held a rally in Tampa later in the day. On Saturday, she is expected to appear at another rally at Florida International University in Miami. For now, her public schedule is clear after that until a Monday appearance in Charlotte.