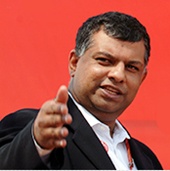 "I am also delighted to share that I have been granted the Overseas Citizenship of India status. India has always been close to my heart as my father was from this country and Goa is my ancestral homeland," Fernandes was quoted in a statement.

OCI confers the same privileges that are enjoyed by non-resident Indians.

The statement was issued to mark the completion of two years of operations of low-cost carrier AirAsia India, which has Fernandes as a partner.

"My father's posting brought him to Malaysia, but he never stopped talking about Goa and the rest is history. I landed in Goa for the first time during the inaugural flight of AirAsia India from Bengaluru to Goa and I take immense pride in that," Fernandes said.

"Since then there has been no looking back and AirAsia's commitment to India has only kept growing stronger. We are here with a vision to revolutionise air travel in India and it is also our long term goal to link India to ASEAN and beyond," he added.

Meanwhile, Air India has decided to give its ground staff and crew a chance to become pilots with the airline, according to a Hindustan Times report. Air India said it wanted to extend an opportunity to several of its ground staff that hold commercial pilots' licences (CPL) but were forced into other jobs due to a slowdown in the Indian aviation industry, which led to an indefinite freeze on recruitment.

Many young Indian pilots who were rendered jobless were forced to take up maintenance or ground operations jobs, or even change their careers due to the slowdown in the aviation industry that was caused by the fall of Kingfisher Airlines and other domestic airlines. The situation seemed to be improving now in the domestic arena, and Air India wanted to cash in on the tide and give its in-house CPL holders a chance to fly its planes first.