Suzuki Motor Corp patriarch Osamu Suzuki said he is stepping down as chief executive and the Japanese automaker promised to cut executive pay and slash 2015 bonuses, hoping to draw a line under the bruising admission of major flaws in its fuel tests. 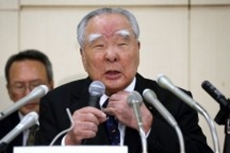 Executive vice president Osamu Honda, who also served as chief technical officer, will retire, taking responsibility for the research and development team at the heart of the testing scandal.

Japan's No 4 automaker by sales said in May it had used the wrong methods to calculate mileage for models going back to 2010, widening a mileage testing storm that had already rocked smaller rival Mitsubishi Motors Corp.

It is not yet clear if the scandal will affect Suzuki's operations in India, where it is the market leader with minority partner Maruti.

Suzuki, who has led the company for nearly four decades, acknowledged that during the past few years it had become difficult to oversee all of the company's operations on his own.

"Upon reflection, I believe that this may have contributed to the latest incident," he told reporters on Wednesday.

Suzuki, 86, will remain as chairman, but his narrower role is a recognition of responsibility for a testing error the company previously shrugged off.

The automaker used indoor tests for its cars' individual parts, rather than testing vehicles on an outdoor course. It said this was done as its testing site is on a windy hill by the sea, making readings erratic.

On Wednesday, it also blamed a lack of transparency in its key research unit.

"This latest incident occurred because of problems within the company which had continued for a long time, including an R&D division which was not transparent enough," said Toshihiro Suzuki, the chairman's eldest son. He took over from his father as president last year.

"We are making these changes today to try to regain the trust of our customers, and to rebuild Team Suzuki."

The company said it had yet to decide who would fill the CEO role or replace Honda, 66.

Suzuki, as chairman, will oversee the company's efforts to strengthen compliance and improve training for engineers, while reworking its mileage testing procedures to ensure they comply with regulations.

Raided by Japanese investigators last week as part of a probe over the tests, Suzuki also said it would encourage whistle-blowing.

Suzuki's changed role and Honda's retirement are effective 29 June, subject to approval by shareholders at its annual general meeting, the company said.

The testing scandals at Suzuki and Mitsubishi come after Volkswagen AG was first discovered last year to have cheated diesel emissions tests in the United States.