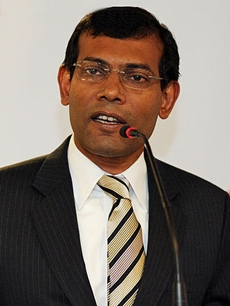 The United Kingdom has granted political refugee status to ousted former President of Maldives Mohamed Nasheed, his lawyer has said.

A prominent human rights campaigner and Maldives' first democratically elected president, 49-year-old Nasheed had been allowed to go to Britain in January for the for spinal cord surgery following a deal brokered by Sri Lanka, India and the UK.

His lawyer Hasan Latheef claimed on Monday that Nasheed had been granted political refugee status, but the British government is yet to comment.

"In the past year, freedom of the press, expression and assembly have all been lost. Given the slide towards authoritarianism in the Maldives, myself and other opposition politicians feel we have no choice but to work from exile - for now," Nasheed said in a statement confirming his exile.

The Madives government said on Monday that it was disappointed that the UK government had agreed to "be part of this charade", adding that British ministers were helping efforts to circumvent the law.

Nasheed became Maldives' first democratically elected leader in 2008, ending three decades of rule by former strongman Maumoon Abdul Gayoom, and served for four years before he was toppled in what he called a coup backed by the military and police.

He was supposed to return to Maldives after treatment, but remained in London, where his wife and daughters have been living since he was jailed.

Nasheed was jailed for 13 years on terrorism charges after allegedly illegally ordering the arrest of a judge in a trial that put a spotlight on instability in the Maldives.

The jail term was widely criticised by international bodies, including the United Nations, and foreign governments.

A popular figure on the world stage, Nasheed's case was championed with the help of a international legal team that included Amal Clooney, the British human rights lawyer and wife of the American actor George Clooney.

He was accorded a red carpet welcome and received by Prime Minister David Cameron after arriving in Britain for treatment.

Cameron described Nasheed as his "best friend" in 2011 and this year hosted the ex-president, his wife and Amal at Downing Street after he arrived in London.

The Maldives stripped Nasheed of his pension entitlements and health insurance last month, after demanding that he return from medical leave in Britain.