Iranian President Hassan Rouhani won a strong vote of confidence and reformist partners secured surprise gains in parliament in early results from elections that could speed up the Islamic Republic's emergence from years of isolation. 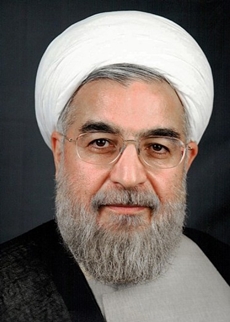 While advances by moderates and reformists in Friday's polls were most evident in the capital, where they won all Tehran's 30 seats according to early results, the sheer scale of the gains there suggests a legislature more friendly to the pragmatist Rouhani has become a distinct possibility.

Top Rouhani ally Akbar Hashemi Rafsanjani, a shrewd political fixer and veteran pro-reform figure, issued a solemn message on Twitter that no one could resist the people's will.

"No one is able to resist against the will of the majority of the people and whoever the people don't want has to step aside," the message said.

A loosening of control by the anti-Western hardliners who currently dominate the 290-seat parliament could strengthen Rouhani's hand to open Iran further to foreign trade and investment following last year's breakthrough nuclear deal.

A reformist-backed list of candidates aligned with Rouhani was on course to win all 30 parliamentary seats in Tehran, initial results released today showed. Top conservative candidate Gholamali Haddad Adel was set to lose his seat.

"The people showed their power once again and gave more credibility and strength to their elected government," Rouhani said, adding he would work with anyone who won election to build a future for the industrialised, oil-exporting country.

There was silence from the conservative camp.

The polls were seen by analysts as a potential turning point for Iran, where nearly 60 per cent of its 80 million population is under 30 and eager to engage with the world following the lifting of most sanctions.

Principlists, otherwise known as hardliners, hold 65 per cent of the outgoing parliament and the rest is divided between reformists and independents who traditionally support Rouhani.

Foad Izadi, an assistant professor at the Faculty of World Studies in Tehran University said the reformists' strong showing was prompted by Rouhani's success in reaching a nuclear agreement between Iran and international powers, the removal of most of the sanctions that had strangled the country's economy over the past decade and restoration of relations with the West.

"It is a sweeping victory for Tehran but for other cities it is not yet clear cut. It is beyond expectations," he added.

Etemad, a reformist newspaper whose managing-editor Elias Hazrati won a seat in Tehran, chose the headline of "clean up in the parliament".

"The next parliament will be like no other parliament in the history of Iran as no political faction will have the absolute say," the newspaper said on its front-page.

Millions crowded polling stations on Friday to vote for parliament and the Assembly of Experts, which selects the country's highest authority, the supreme leader. Both bodies have been in the hands of hardliners for years.

Supporters of Rouhani, who promoted the nuclear deal, were pitted against hardliners close to Supreme Leader Ayatollah Ali Khamenei, who are wary of detente with Western countries.

Rouhani and Rafsanjani led the race for the Assembly of Experts with most votes counted, and appeared to be sure of winning seats, early results released on Saturday showed.

Until now, the contest for this seat of clerical power was an unremarkable event, but not now. Because of Khamenei's health and age, 76, the new assembly members who serve eight-year terms are likely to choose his successor. The next leader could well be among those elected this week.

Rafsanjani is among the founders of the Islamic Republic and a former president. Often at the centre of Iran's intricate webs of power, he is famous for his pragmatism and political acumen.

Just one prominent hardliner was on course to be elected in the experts assembly race in Tehran - Ahmad Jannati, in 15th place out of the 16 seats reserved for the capital's candidates.

The assembly's current chairman, Mohammad Yazdi, on 17th, and arch-conservative, Mohammad-Taghi Mesbah-Yazdi, on 19th, appeared unlikely to win seats, according to partial results.

Mesbah-Yazdi is a fierce critic of reformists and has even advocated violence against its supporters. After disputed 2009 presidential elections, Mesbah-Yazdi strongly supported official winner Mahmoud Ahmadinejad and was seen as his mentor.

A Reuters tally, based on official results published so far, suggested the pro-Rouhani camp and allied independents were leading in the parliamentary vote. Some moderate conservatives, including current speaker Ali Larijani, support Rouhani.

Reformists had 23 per cent, independents 18 and principlists 36, according to Reuters calculations based on final results, excluding Tehran where results remain preliminary.

Twenty three per cent of candidates will have to go to run-offs in late April because nobody won the required 25 per cent of votes cast. Eight of the initial winners were women.

Analysts say the large number of independents may be significant as they could cooperate across ideological lines with Rouhani's government. Whatever the outcome, Iran's political system places much power in the hands of the conservative Islamic establishment including the Guardian Council, which vets all laws passed by parliament.