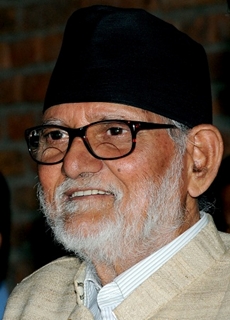 Koirala, 78, a senior figure in one of Nepal's biggest political dynasties, stood down as prime minister in October. He died overnight of respiratory illness at his nephew's home in Kathmandu.

He had helped prepare Nepal's first republican constitution that its authors hoped would take the Himalayan nation closer to stability and peace after years of conflict and the abolition of the 239-year-old monarchy.

Koirala was head of the centrist Nepali Congress party, the largest opposition group in Parliament, and had been expected to face a leadership challenge next month.

Nepal has been in turmoil since the new constitution was adopted in September. The ethnic Madhesi community launched protests against the charter, saying it did not address their demand for a greater say in government.

Laxman Lal Karna, from the Sadbhavana Party that organised those protests, said Koirala's death would not derail talks aimed at securing greater rights for minorities.

Others said his death presented a succession problem for the Koirala dynasty. He never married.

''More crucial will be who will carry the legacy of the Koirala dynasty that has produced four prime ministers in the past and dominated the Nepali Congress party in the past six decades,'' said Yubaraj Ghimire, editor of the Annapurna Post daily.

Political vacuum
The Congress will hold a leadership election next month, with some in the party saying it could then seek to engineer the downfall of Prime Minister K P Oli, whose tough line against Madhesi protesters has angered India.

The front runner to take over as party leader is Sher Bahadur Deuba, a three-time former prime minister who comes from the same social democratic tradition as Koirala and would likely show little sympathy towards the constitutional protesters.

Although talks have made scant progress on meeting the grievances of minority Madhesis, who live in Nepal's southern plains and have close ties to India, tensions eased when they lifted a border blockade on Monday.

That could pave the way for Oli to visit India later this month after Nepal's finance minister met government leaders in New Delhi over the weekend.

Koirala spent several years in India, where he had close political ties. He was jailed there for three years for his role in the hijacking of a Nepali plane during the democracy struggle of the 1970s.

Thousands of mourners, many carrying bouquets of flowers, gathered outside the house where Koirala's body lay.

''He was a good-mannered and a moderate leader. I feel very sorry,'' said Chabilal Tamang, a Kathmandu vendor.

Koirala had undergone treatment for tongue cancer in the United States and was given a clean bill of health in November before succumbing to pneumonia and bronchitis, aides said.