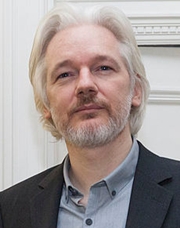 WikiLeaks founder Julian Assange may emerge from his refuge in the Ecuadorian embassy in London on Friday after over three years, as a United Nations panel examining his appeal will rule that his stay in the embassy amounts to ''unlawful detention'', the BBC reported.

Assange had said that he would hand himself in to British police if his appeal to a UN panel falls through . If the appeal is successful, he said he would expect to be able to leave the embassy a free man.

Assange, a former computer hacker who has been holed up in the embassy since June 2012, told the UN Working Group on Arbitrary Detention that he was a political refugee whose rights had been infringed by being unable to take up asylum in Ecuador (Ecuador grants political asylum to Julian Assange).

There was no immediate confirmation of the BBC report as the UN the panel's opinion, which is not legally binding, was due to be published on Friday. The British police said Assange would face arrest if he leaves the embassy.

This was confirmed by British Prime Minister David Cameron's spokesman, who said today that if Assange leaves the Ecuadorian embassy in London he would be arrested, reiterating his government's position since Asange first took rfuge in the embassy.

In 2012 British foreign secretary William Hague had said, ''We will not allow Assange safe passage out of the United Kingdom, nor is there any legal basis for us to do so. The United Kingdom does not recognise the principle of diplomatic asylum.'' (Assange will be promptly nabbed if he steps out: UK)

The spokesman said that any decision by a United Nations panel that is examining Assange's appeal would not be legally binding and that an arrest warrant for Assange would be put into effect if he left the embassy.

The Australian, who jumped bail to take refuge in the embassy, is wanted in Sweden for questioning over allegations of rape in 2010, which he denies.

''Should the UN announce tomorrow that I have lost my case against the United Kingdom and Sweden, I shall exit the embassy at noon on Friday to accept arrest by British police as there is no meaningful prospect of further appeal,'' Assange said in a statement posted on the Wikileaks Twitter account.

''However, should I prevail and the state parties be found to have acted unlawfully, I expect the immediate return of my passport and the termination of further attempts to arrest me.'' (See: Assange willing to face arrest if UN panel upholds charges)

The decision in his favour marks the latest twist in a tumultuous journey for Assange since he incensed the United States and its allies by using his WikiLeaks website to leak hundreds of thousands of secret US diplomatic and military cables in 2010, disclosures that often embarrassed Washington.

Assange, 44, fears Sweden will extradite him to the United States, where he could be put on trial over WikiLeaks' publication of the classified military and diplomatic documents, one of the largest information leaks in US history.

Exposing secrets
He made international headlines in early 2010 when WikiLeaks published classified US military video showing a 2007 attack by Apache helicopters that killed a dozen people in Baghdad, including two Reuters news staff.

Those disclosures were followed by the release of more than 250,000 classified cables from US embassies. It would go on to add almost three million more diplomatic cables dating back to 1973.

The main source of the leaks, US Army soldier Chelsea Manning, was sentenced to 35 years in prison for breaches of the Espionage Act. 'Arbitrary detention'

Assange says he is the victim of a witch hunt directed by the United States and that his fate is a test case for freedom of expression.

He said that he had been deprived of his fundamental liberties, including lack of access to sunlight or fresh air, adequate medical facilities, as well as legal and procedural insecurity.

Per Samuelson, one of Assange's Swedish lawyers, said if the UN panel judged Assange's time in the embassy to be custody, he should be released immediately.

''It is a very important body that would be then saying that Sweden's actions are inconsistent with the European Convention on Human Rights. And it is international common practice to follow those decisions,'' Samuelson told Reuters.

Since Assange's confinement, WikiLeaks has continued to publish documents on topics such as the Trans-Pacific Partnership, one of the world's biggest multinational trade deals, which was signed by 12 member nations today in New Zealand.

WikiLeaks has said Sweden's handling of its founder's case has left a "black stain" on the country's human rights record.

In September 2014, Assange filed a complaint against Sweden and Britain to the UN Working Group on Arbitrary Detention, claiming his confinement in the embassy amounted to illegal detention.

"The only protection he has ... is to stay in the confines of the embassy; the only way for Mr Assange to enjoy his right to asylum is to be in detention," the submission said.

"This is not a legally acceptable choice," it added, according to a file posted on the website justice4assange.com.

A divisive figure, Assange has likened his confinement in the embassy, where he lives in a small room divided into an office and a living area, to living on a space station.

Previously he lived in the more impressive surroundings of an English country mansion owned by one of his supporters, documentary maker Vaughan Smith.

In October last year, British police ended a round-the-clock guard outside the embassy building but said they would strengthen a "covert plan" to prevent his departure.

London police said at the time, "The operation to arrest Julian Assange does however continue and should he leave the embassy ... (police) will make every effort to arrest him."