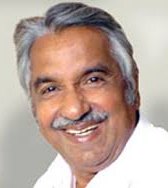 Saritha, who yesterday made disclosures before the Justice Sivarajan Commission probing the case, had targeted Chandy and Arayadan. In her revelations before the commission, she had stated that she had delivered Rs1.90 crore in two installments, as part of a Rs7-crore bribe demanded by Chandy, through his then staff member Jikumon. She also stated that an amount of Rs40 lakh was paid to Mohammed through his personal assistant.

Both Chandy and Aryadan denied the allegations. Chandy also alleged "political conspiracy" behind the bribery allegations made against him by the solar scam accused, and said a section of the bar owners are behind it.

The vigilance director has been asked to file the FIR and complete the probe as early as possible.

Joseph said he had based his complaint on the statements made by Saritha S Nair, prime accused in the solar scam, yesterday before the Justice Sivarajan commission probing the scam.

Meanwhile, Chandy was shown black flag by the protesters of DYFI and Yuva Morcha - the youth organisations of CPI(M) and BJP respectively, following which protesters were lathi charged.

In another development giving some comfort to the beleaguered state government, the state high court today stayed proceedings against Excise minister K Babu for two months, after he tendered resignation in the wake of the vigilance court's remarks against him.