Cashback and coupons site CashKaro is the latest new venture to receive funding from Ratan Tata, making it Tata's third start-up funding in 2016. 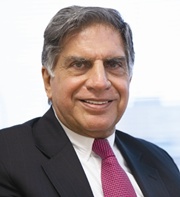 The business icon who invested in Tracxn and Dogspot in January and in about 14 startups in 2015, including UrbanClap, CrayonData and Paytm, is passionate about some of the unconventional concepts.

Founded by entrepreneur couple Swati and Rohan Bhargava in 2013, Gurgaon-based CashKaro had also raised angel funding of $750,000 from a group of London-based investors in the same year.

CashKaro, which works on a commission basis, has tied up with over 1,000 online shopping portals, including Amazon.in, Paytm, Jabong, and ShopClues. Customers who use CashKaro's portal do their shopping on its affiliate sites get up to 30 per cent additional cashback.

The company also claims to have credited Rs30 crore worth of cashback to its members.

CashKaro claims to be the largest cashback site in India with over 10 lakh-registered users and over five million page views a month. It is targeting business worth over Rs1,000 crore in gross merchandise value in the next few months.

Ratan Tata, chairman emeritus of Tata Sons, is the star investor and the most sought after angel investor in the Indian startup ecosystem.

Swati and Rohan Bhargava, co-founders of CashKaro, said an investment by Ratan Tata is an affirmation of the opportunity that CashKaro is addressing.

''The funding from Mr Ratan Tata marks another milestone in CashKaro's three-year journey. We are privileged to have him come on-board as an investorHis expertise and insight will be immensely helpful as CashKaro.com expands to newer markets and pursues an aggressive customer acquisition strategy.''

Discount sites such as CashKaro are essentially driven by the e-commerce boom in India, which is estimated to reach $100 billion in financial year 2020.

A study by Internet and Mobile Association of India (IAMAI) in 2015 estimated that affiliate sites, which includes cashback firms like CashKaro, account for over 15 per cent of e-commerce sales in India.

But, the cashback space is already quite crowded as Cashkaro has to compete with similar ventures such as LafaLafa, GoPaisa and Pennyful among others. LafaLafa, which is based in Hong Kong and India,  has also backed about 500 start-ups that will compete with CashKaro.

Although CashKaro seems to have built a business that has scaled quite rapidly without raising a lot of risk capital, it now needs to build upon its business model that has attracted investor interest.