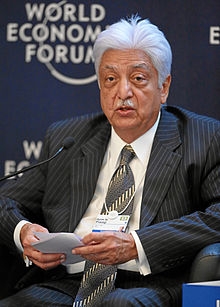 Azim Premji, 70, chairman of Wipro, is the most generous Indian of the year for the third time in a row with donations worth Rs27,514 crore to the education sector, according to the Hurun India Philanthropy List 2015.

The top five contributors on the list are from the information technology industry. Premji is followed by Nandan Nilekani and his wife Rohini Nilekani, with donations of Rs2,404 crore, while Infosys co-founder N R Narayana Murthy stood third with donations of Rs1,322 crore.

The Azim Premji foundation works in the education sector with operations in eight states and over 350,000 schools.

The top five are also the biggest wealth creators on the Hurun India Rich List. The richest Indian, Mukesh Ambani, chairman of Reliance Industries (RIL), stood sixth on the philanthropy list with donations of Rs345 crore.

K Dinesh, after retiring from Infosys in 2011, has been actively involved in philanthropic ventures in education, entrepreneurship encouragement and health care. With donations of Rs1,238 crore, he got into the top 10 for the first time with fourth rank.

Dinesh is followed by Shiv Nadar, promoter of the $6.3-billion HCL Technologies, India's fourth-largest software company, as he donated Rs525 crore to various charitable activities through the Shiv Nadar Foundation.

This year only 36 individuals made it to the Hurun India Philanthropy List compared with 50 last year. Rohan Murthy is a good example of the new generation of Indian philanthropists, according to the report.