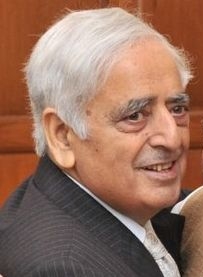 Sayeed, 79, was admitted to the All India Institute of Medical Sciences in New Delhi on 24 December AIIMS with complaints of neck pain and fever, and detected to have sepsis, decreased blood count and pneumonia.

The chief minister breathed his last around 7.30 am, state education minister and spokesman for the government Nayeem Akhter said.

Sayeed is survived by his wife, three daughters including PDP President Mehbooba Mufti, and a son.

His body would be flown to Srinagar where it will be kept for people to pay their last homage to their leader. He is likely to be buried in his ancestral village in South Kashmir.

Several politicians took to Twitter to express their condolences.

Political journey
From an obscure lawyer to becoming the only Muslim home minister the country has seen so far, Mufti Mohammad Sayeed carved a niche for himself in national and Jammu and Kashmir politics with the craftiness and unwavering focus of an avid bridge player he was.

In a political career spanning nearly six decades, Sayeed emerged as a rival power centre to the mighty Abdullahs, always playing his cards close to the chest, while making friends with parties following conflicting ideologies to suit his political agenda.

The high points in the political journey of Sayeed was his being catapulted to the chair of free India's first Muslim Home Minister in 1989 and, years later, becoming the Chief Minister of the restive state for a second time in 2015, heading a coalition with BJP, which had its first brush with power in the only Muslim-majority state.

Sayeed's stint in the home ministry, at a time when militancy had begun to rear its terrifying head in his home state, would, however, be most remembered for the kidnapping of his third daughter Rubaiya by the Jammu and Kashmir Liberation Fromt (JKLF). The militants demanded freeing five of their comrades in exchange for Rubaiya's freedom and let her off only after their demand had been met.

The kidnapping and subsequent release of the militants, according to Sayeed's rivals, projected India as a ''soft state'' for the first time.

Born in Baba Mohalla of Bijbehara in Anantnag district on 12 January 1936, Sayeed had his early education at a local school and graduated from S P College, Srinagar. He went on to obtain a law degree and master's degree in Arab History from Aligarh Muslim University.