Israel's disgraced former Prime Minister Ehud Olmert is set to go behind bars in a major graft scandal as the country's top court on Tuesday upheld his bribery conviction, making him the first ex-premier in the country's history to serve a jail term. 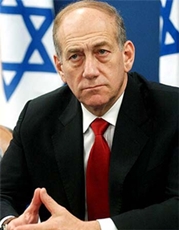 The Supreme Court, however, reduced the 70-year-old leader's sentence from six years to 18 months in prison, and acquitted him on one of the charges.

Olmert, who was prime minister from 2006 to 2009, was sentenced in May 2014 to six years in prison on two separate charges of taking bribes.

The Supreme Court's ruling brings an end to what has been described as the largest bribery scandal in Israel's history.

Olmert is to begin serving his sentence from 15 February next year.

In a statement to media after the verdict, the disgraced leader said he had never accepted any bribes, but respects the court's decision to uphold his conviction for the lesser charge.

The former prime minister likened the so-called "Holyland affair" to "an irritating, onerous black cloud" and said a great weight had been lifted with his acquittal in that case.

The Holyland affair refers to a housing project of high rise buildings over a hilltop overlooking the city.

In 2010, he was named the key suspect in the case and was accused of receiving hundreds of thousands of shekels for helping developers get the project past various legal and planning obstacles.

Olmert was handed a six-year prison sentence and NIS 1 million (about $250,000) fine in 2014 for receiving some NIS 500,000 ($25,000) in bribes through his brother in the Holyland real estate corruption case during his tenure as Jerusalem mayor before becoming the prime minister.

The original indictment in the case was based on testimony by state witness Shmuel Dachner, who died in 2013 before defence attorneys had the opportunity to cross-examine him.

Olmert has appealed on the ground of lack of opportunity to question the key witness.

He was forced to resign as Prime Minister in 2009 amid a flurry of corruption allegations.

A total of 13 government officials, developers and other businesspersons were charged in three separate schemes of graft.