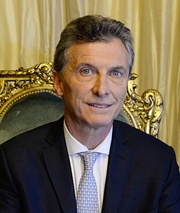 Mauricio Macri was sworn in on Thursday as Argentina's President, inheriting myriad economic problems from the often-divisive outgoing President Cristina Fernandez, who skipped the inauguration in a final sign of confrontation that underscored deep polarisation in the country.

Macri, the former mayor of Buenos Aires who hails from one of Argentina's richest families, took the oath of office in Congress in front of legislators, several Latin American heads of state and other dignitaries, including former Spanish King Juan Carlos I.

"Today a dream is being achieved," said Macri as he took the oath 15 minutes ahead of schedule, surprising commentators who noted Argentina isn't known for such punctuality.

The new president then launched into a speech that was both a long list of promises and a frank, if not brutal, assessment of how he saw Argentina, a country rich in natural resources that has also suffered several major economic meltdowns.

Macri said the nation of 41 million people was entering the 21st century behind in its development, and that its education system needed modernised at all levels.

He said that "lying about and hiding" the state of the economy had tarnished Argentina's reputation worldwide, a clear dig at the Fernandez administration, which often put out suspect figures on inflation, poverty rates and GDP.

"I will always be honest with you," Macri told the nation. "And being honest means telling you that the challenges in front of us are enormous."

The 56-year-old ran on promises to usher in an era of more civil discourse and roll back much of the Fernandez administration spending that many economists say has brought Argentina to the brink of another financial crisis.

Throughout his campaign, Macri argued that measured free-market reforms would overhaul the struggling economy. He also promised to be a leader "who listens more and talks less," a clear contrast with Fernandez, who frequently blasted opponents during hours-long speeches.

In his Thursday address, Macri promised to fight the nation's growing drug trade "as no president has before." He also said he would make good on his aim to achieve "zero poverty" in the country and be ruthless in cracking down on corruption.

Fernandez, and before her, her late husband and predecessor, Nestor Kirchner, dominated Argentina's political landscape for the last 12 years. The power couple sharply increased spending on social welfare programmes while raising tariffs in attempts to protect local industries and aligning the country with leftist leaders like late Venezuelan President Hugo Chavez and Bolivian President Evo Morales.

Macri has promised to undo many of those policies and improve relations with the United States.