The Delhi high court on Monday rejected a petition by Congress president Sonia Gandhi and her son and Congress vice-president Rahul Gandhi challenging a lower court order directing the two to appear before it in the National Herald case, dealing a blow to the Congress party and its leadership. 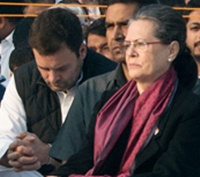 The high court dismissed their pleas challenging summons issued to them in the National Herald case, and upheld the trial court order directing them to appear before it on Tuesday (7 December 2015).

"Petitions are dismissed," Justice Sunil Gaur said in his judgement while also declining another plea for exemption to Sonia Gandhi and Rahul Gandhi from personal appearance in the lower court.

The Gandhis and another five accused, including Suman Dubey, Moti Lal Vohra, Oscar Fernandez, Sam Pitroda and the firm Young India Ltd, will have to appear before in the trial court, when the case comes up for hearing on Tuesday.

The HC also refused to extend the 6 August 2014, interim order by which the summons were stayed.

"No," Justice Gaur said in response to oral pleas by senior advocate Harin Raval, appearing for the accused, that either an exemption from personal appearance be granted or the 6 August 2014 order staying the summons be extended.

The court, in its judgement, has also questioned the need for extending interest-free loan to Associated Journals Ltd (AJL) the publishers of National Herald. "Where was need to extend interest free loan?" it asked.

The Congress, however, is in no mood to comply with the court summons and is instead moving the division bench of the high court challenging the order.

Subramanian Swamy, who filed the petition against Sonia, Rahul and some other top leaders of the Congress, also said he was ready to take the fight to the Supreme Court if they wish.

"If Rahul and Sonia decided to move the Supreme Court, I am prepared for that," Swamy said in New Delhi.

Swamy in his petition has alleged "breach of trust and cheating" in the Congress lending Rs90.25 crore to Associated Journals Ltd (AJL) and then on 28 December 2010 assigning the debt to Young Indian Ltd (YIL), the charitable company run by the Gandhis, for Rs50 lakh.

Sonia and Rahul, who allegedly hold 38 per cent stake each in YIL, benefited from the acquisition, Swamy pointed out.

This means that the property owned by National Herald in the national capital, which is now worth over Rs5,000-crore, will go to Sonia and Rahul Gandhi who together own 76 per cent in Young India Ltd, the current owners of Associated Journals Ltd.

The Congress, however, claims there is no illegality in Young India Ltd (YIL) taking over Associated Journals Ltd (AJL), the publisher of the now-defunct National Herald newspaper, as per the Companies Act.

The high court, however, left a decision on the legality of a loan given by Congress-owned Associated Journal Ltd (AJL), publisher of the erstwhile National Herald, to Young Indian Pvt Ltd (YIL), a company majority owned by Sonia Gandhi and her son Rahul Gandhi, to the lower court.

Justice Sunil Gaur of the Delhi High Court, while reserving a judgement on the case on Friday, had cmmented that the Congress party could have written off its Rs90.25 crore loan to publishers of National Herald instead of assigning it to a charity outfit run by some of its leaders.

The newspaper set up in 1938 by Jawaharlal Nehru played a prominent role in promoting nationalist sentiment before India's independence in 1947. The publication was dogged by bad management, poor circulation and falling revenue, and Sonia Gandhi decided to close it down in 2008.