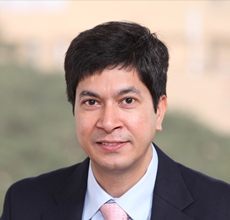 Bansal replaces Mitesh Shah, who will now lead the strategic finance initiatives in the new CFO's team. Ola, owned by ANI Technologies Pvt Ltd, said in a statement on Wednesday.

''[Bansal] brings with him a wealth of experience from his long tenure at Infosys. Rajiv's understanding and expertise in the finance domain is extremely valuable for us at this juncture of growth. His experience of being at the helm of finance for one of India's most respected companies will help us in adopting best practices and in realising our mission of building mobility for a billion people,'' said Bhavish Aggarwal, co-founder and chief executive of Ola.

Bansal, in the statement, said, ''...As one of India's most valuable start-ups, it carries with it a mighty responsibility of setting an example on corporate governance and best practices in finance. I am thoroughly excited about coming onboard with this amazing team to co-create yet another globally admired company out of India.''

Bansal had stepped down from Infosys, India's second-largest software exporter by sales, last month, citing his desire to explore new options. He was appointed CFO of Infosys in 2012, when the company was going through a management shake-up, amid a string of senior executive resignations.

Bansal, who has spent more than two decades at Infosys in various roles, including head of finance, remains an advisor to its chief executive officer Vishal Sikka until the end of this year. His appointment at Ola is effective January.

Bansal's appointment at Ola comes as the company, India's third-most valuable start-up, is in the process of overhauling its senior leadership and is looking to hire a new product chief, engineering head and general counsel.

The company, which is present in more than 100 cities in India offering on-demand cab and auto-rickshaw services, has to have a strong leadership in place as it invests heavily to expand into new cities and create new products to maintain its lead over Uber.

Over the last one year, Ola has been investing in new businesses, sometimes closely tracking the model followed by Uber in other markets, including setting up a leasing unit that buys cars for its drivers, a food delivery service called Ola Café and an independent grocery ordering app Ola Store.

It is also testing shuttle bus services in some cities.