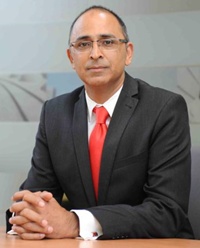 Finnish telecom equipment manufacturer Nokia has appointed Sandeep Girotra as its India head, overseeing customer operation for the the Nokia and Alcatel-Lucent combine across the country.

Girotra joined Nokia Networks in 1996 and has held a number of different roles in India, heading the region since 2011. In 2010 he served as Head of Sales for Business Solution Networks having been Customer Team Head at Idea Cellular within Nokia Siemens Networks from 2007 to 2009.

Sandeep Girotra will report to Ashish Chowdhary, chief customer operations Officer. Prior to the promotion, he was vice-president and head of India at Nokia Networks.

The appointment follows the announcement of the company's senior leadership team and organisational structure for the combined Nokia and Alcatel-Lucent on 7 October 2015.

In April, Nokia had announced the acquisition of Alcatel-Lucent for €15.6 billion in an all all-stock deal (See: Nokia to acquire Alcatel-Lucent in $16.6-bn stock deal).

The proposed appointment is effective only after the successful closing of the public exchange offer and is subject to the completion of the relevant works council consultation procedures, the company said in a statement.