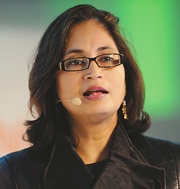 Former chief technology and strategy officer of Cisco Systems, and CTO of Motorola, Padmasree Warrior is in the race to lead Twitter as its new chief executive officer, Bloomberg reported.

The search for the micro-blogging network's CEO had gained urgency with the company board meeting scheduled for Thursday to discuss the shortlisted names for the post.

Bloomberg reported citing sources that Warrior's name would be discussed in the meeting.

The search for Twitter's CEO had been on over the last three months, in the backdrop the company's stock falling 22 per cent and many product executives leaving the firm during the period.

Warrior was born and raised in Vijayawada in  Andhra Pradesh, and attended Maris Stella College.

During her tenure as CTO, Motorola was awarded the 2004 National Medal of Technology by the president of the US, the first time the company had received this honour.

Warrior left Motorola in 2007 to become CTO at Cisco Systems. During her tenure at Cisco, Warrior saw the company grow through a series of acquisitions, including six in 2014 and 10 in 2013.