What's in a name? The threat remains the same

President Barak Obama, ahead of a three-day visit to Alaska from Monday to discuss climate change with other Arctic leaders, made a major announcement on Sunday by officially renaming Mt McKinley - North America's highest peak - Denali, its traditional native name.

Ohio legislators have been quick to knock the move to knock home-state legend William McKinley, a former US President, off his pedestal. House Speaker John Boehner, a Republican who represents western Ohio, said he was "deeply disappointed" in the decision.

The push to call the summit by its Native Alaskan title is just the latest example in what has been a recent string of reassessing the cultural significance of names, an example of Obama's legacy of trying to undo what he sees as historical injustices, but others have seen it as throwing aside long-standing tradition on behalf of political correctness.

"There is a reason President McKinley's name has served atop the highest peak in North America for more than 100 years, and that is because it is a testament to his great legacy," Boehner said in a statement.

Another Republican, Ohio Sen. Rob Portman, tweeted his disappointment Sunday night: "President McKinley was a proud Ohioan, and the mountain was named after him, as a way to remember his rich legacy after his assassination."

Indian politicians have of course long enjoyed the name-changing game, changing the name of everything from metropolises to obscure by-lanes, either to purportedly reflect their 'native' pronunciation or to ostensibly glorify some little-known freedom fighter or social reformer.

Still, name-changing is a tricky game. For example, you could sound gauche by calling the highest mountain in the world Mt Everest - the mountaineering fraternity and the cognoscenti prefer the  Tibetan name Chomlungma.

The real issues
But as Obama visits melting glaciers and remote towns, name-changing will not change the climatic issues involved in the world's most critical geological region.

The trip's purpose is to highlight climate change - and for Alaska in particular, the change has been dramatic.

Alaska has already warmed by more than 3 degrees Fahrenheit over the last 50 years. Overall, that has led to sweeping changes. They include dramatic ice melting - Alaska's glaciers are now losing 75 billion tons of ice every year.

It isn't just glaciers - it's all frozen stuff. Data show that Alaska had a very early snow cover loss this year, heating up the ground earlier and helping set the stage for one of its worst wildfire seasons ever.

Worsening fires don't just present dangers to humans or to wildlife - they can change entire forests. In Alaskan fires, what tends to burn is black spruce forests, with a thick organic layer on the forest floor that also often goes up in smoke. What grows can be quite different - aspen or birch – and these trees bring with them a very different ecosystem. 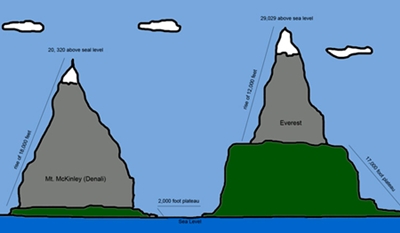 Destabilised permafrost
Eighty per cent of Alaska is underlain by at least some amount of permafrost - ground that is frozen all year round. But as the state warms up quickly, permafrost is thawing. Wildfires, which can burn off trees, hasten this process. But it is also happening even without them, simply due to higher temperatures.

The loss of permafrost can undermine Alaskan roads and infrastructure and also creates the curious phenomenon known as ''drunken trees.'' But the bigger issue may be climatic.

When permafrost thaws, that allows old plants, long preserved in the frozen ground, to begin the process of decomposition. And much like what happens when you burn trees above ground, this releases carbon - mostly in the form of carbon dioxide.

Scientists have estimated that by the year 2100, permafrost around the world - not just in Alaska, but also in Canada, Siberia and other Arctic nations - could release some 150 gigatons of carbon to the atmosphere if warming continues apace (a gigaton is a billion metric tons).