OP Munjal, chairman emeritus of Hero Cycles and one of the founders of Hero Group, passed away earlier today in Ludhiana. 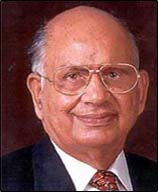 Munjal, 86, was admitted to Hero Heart Institute at Dayanand Medical College and Hospital in Ludhiana on Monday after he felt uneasy. Munjal was facing health related issues for the past few months.

He is survived by a son, four daughters, a daughter-in-law, four son-in-laws and 10 grandchildren.

The cremation will take place tomorrow (14th August 2015) in Ludhiana.

Munjal had only last month ceded chairmanship of Hero Motors group and retired from active role in the business. His son Pankaj Munjal succeeded him as the chairman and managing director of the group.

OP Munjal was born on 26 August 1928 in Pakistan. Along with his three brothers - Brijmohan Lall Munjal, Dayanand Munjal and Satyanand Munjal – he started a bicycle spare parts business in Amritsar In 1944. They subsequently moved their base to Ludhiana, naming the company 'Hero', and set up India's first bicycle manufacturing unit in 1956.

During 1980s Hero Cycles became the largest bicycle manufacturer by volume in the world.

Munjal, who led Hero Cycles for almost 60 years, also helped Hero Cycles in diversifying to other businesses such as auto parts manufacturing and hospitality. Under his leadership, the company grew from its humble beginnings to a fledging Rs3,000-crore industrial house. He also served as the president of All India Cycle Manufacturers' Association.

Munjal was also a known philanthropist. He supported several educational institutions and hospitals across India.