Former union telecom minister Dayanidhi Maran faces fresh arrest after the Madras high court today cancelled his interim bail in the illegal telephone exchange case after the CBI complained that he was not cooperating in the investigation. 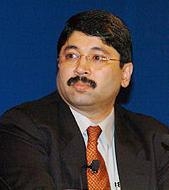 Cancelling the six-week interim bail and disposing of his bail plea, Justice S Vaidhyanathan asked the former central minister to surrender before the CBI latest by 4:30 pm on 13 August.

The court had, on 30 June, granted Maran a six-week anticipatory bail on condition that he cooperates with the investigators.

Now, without the legal protection, the former union minister, who was earlier jailed in the telecom licence scandal, faces the prospect of fresh arrest.

''Failing which, the CBI is at liberty to take action in accordance with law,'' said Justice S Vaidhyananthan, quashing Maran's appeal to the court to turn the interim bail into a permanent one.

Maran had earlier alleged that the CBI was trying to malign him, but the court did not agree with him.

"After evaluating the entire available material against Maran, I find prima facie the exact role he being the union minister for communications and information technology in misusing his office for his wrongful gain by obtaining telephone connections illegally in the name of BSNL officials under 'service category'. As such, I do not find any frivolity in the prosecution. Allegations which were attributed to Maran are corroborated by the material and circumstances on record," Justice Vaidhyanathan said in his order.

Ironically, the CBI had started the preliminary enquiry into the case in 2011 and lodged an FIR in 2013. Till 13 June 2015, the investigating agency had not made any attempts to arrest Maran who had no legal protection at that time, the Judge noted.

While the court has allowed Maran three days to surrender, without the legal cover, Maran faces certain arrest.

The CBI has registered an FIR against Maran alleging that he had misused his position as the then telecom minister at the centre to set up a telephone exchange with over 300 high-speed telephone lines at his Chennai residence between 2004 and 2007.

This facility was later rerouted to Sun TV Network, a broadcasting network run by his brother Kalanithi Maran.

In the process, the exchequer lost an estimated Rs1.8 crore, according to CBI.

CBI told the Madras high court that Maran was not cooperating and was evasive in his responses to questions.

Maran's lawyers are examining options for moving the Supreme Court to seek reprieve, say sources close to the former minister.