Louisiana governor Bobby Jindal yesterday became the first Indian-origin American to throw his hat in the ring for US presidential elections. 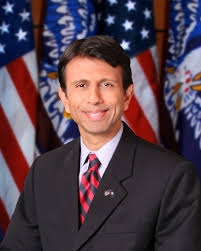 Piyush "Bobby" Jindal , 44, announced his candidature for the 2016 US elections yesterday. He kicked off his campaign in a light-hearted manner, with online videos of himself and his wife, Supriya, telling their three children he was running.

A commentator noted Jindal "enters a very crowded field of hopeful Republican candidates in at least one poll."

The two-term Louisiana governor, once seen as a rising star in his party, joins 12 other Republicans, including former Florida Governor Jeb Bush, among the hopefuls seeking the nomination for the November 2016 election.

Others, including Wisconsin Governor Scott Walker, are expected to join the race.

Jindal wqs born on 10 June 1971 in in Baton Rouge, Louisiana, barely six months after his parents immigrated to the US from Punjab.

He studied at Baton Rouge Magnet High School, passing out in 1988 at the top of his class. While in high school, started a computer newsletter, a retail candy business, and a mail-order software company.

Jindal was one of 50 students nationwide admitted to the Program in Liberal Medical Education (PLME) at Brown University, guaranteeing him a place in medical school.

He was accepted by both Harvard Medical School and Yale Law School, but studied at New College, Oxford, as a Rhodes Scholar. He received an M.Litt. degree in political science with an emphasis in health policy from the University of Oxford in 1994.

Jindal e turned down an offer to study for a D.Phil. in politics, instead joining the consulting firm McKinsey & Company.

In 2001, Jindal was appointed as the principal adviser to Tommy Thompson, the United States Secretary of Health and Human Services by the 43rd President, George W. Bush.

He first ran for governor in 2003 but lost to the Democratic candidate, Kathleen Blanco. He then won a seat in the United States House of Representatives in the 2004 elections, becoming the second Indian American in Congress.

He was re-elected in 2006, and a year later ran for governor in 2007 securing an outright majority in the first round of balloting and became the first Indian American governor in the United States.