Praful Bidwai a former assistant editor of The Times of India and a well-known columnist, passed away unexpectedly on Tuesday. He was 65. 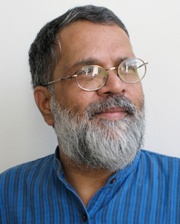 Bidwai died in Amsterdam on Tuesday evening at a dinner after a conference at The Transnational Institute.

"He was sitting at a cafe there when he choked on his food and died," reports quoting close friends said.

Praful Bidwai was one of South Asia's most widely published columnists, whose articles appeared in over 20 newspapers and magazines in the sub-continent and the Middle East.

He was also frequently published by The Guardian, Le Monde Diplomatique and Il Manifesto and is a founder-member of the Coalition for Nuclear Disarmament and Peace (India).

A senior fellow, Centre for Contemporary Studies, Nehru Memorial Museum and Library, New Delhi, Praful Bidwai was co-author, with another former Times of India ex assistant editor Achin Vanaik, of South Asia on a Short Fuse: Nuclear Politics and the Future of Global Disarmament, Oxford University Press, New Delhi, 1999, and a radical critique of the nuclearisation of India and Pakistan and of reliance on nuclear weapons for security.

His new book being published by Harper Collins, The Phoenix Moment: Challenges Confronting the Indian Left is an epic study of the achievements and the crises facing the Indian left.

Born in Nagpur, Bidwai worked in The Times of India for many years as a senior assistant editor before embarking on a freelance career. He wrote a regular column for Frontline and Hindustan Times for several years.

His new book being published by Harper Collins, The Phoenix Moment: Challenges Confronting the Indian Left' is an epic study of the achievements and the crises facing the Indian left.

Bidwai was bachelor and is survived by his two sisters.