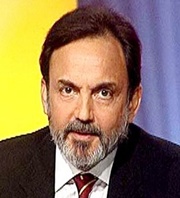 Prannoy Roy, executive co-chairman of NDTV Group, has been awarded the Mumbai Press Club `RedInk Award 2015' for lifetime achievement of excellence in journalism and his consistent and pioneering contribution to news television in India.

Maharashtra chief minister Devendra Fadnavis will present the award to Roy at a glittering ceremony at the Jamshed Bhaba Auditorium, NCPA, Mumbai, on 30 April, a Press Club release said.

Roy, along with his wife and journalist Radhika Roy, in 1988, was the first to set up a television news production company called `New Delhi Television', now called NDTV.

Later, Roy made a mark for his incisive and pioneering coverage of election news and his ground-breaking programmes such as 'The News Tonight' and 'The World This Week'.

After years of producing the news for Star News, Roy launched his own broadcasting network with NDTV 24X7, NDTV India and other channels in 2003. NDTV, one of the largest news networks in the country today, has set up benchmarks for good, ethical and no-frills news coverage, the release noted.

A Press Club release said Prannoy Roy was chosen for the RedInk Lifetime Achievement Award from a shortlist of senior editors by a survey among 200 journalists all over India, and a final consideration by the managing committee of the Mumbai Press Club.

The Press Club said judging for the RedInk Awards, which includes as many as 10 categories have been completed, and as many as 24 journalists who have produced outstanding and impactful stories in calendar 2014 will also receive awards along with
Roy on 30 April at the NCPA.