Hilary Clinton's stature seen as both asset and liability 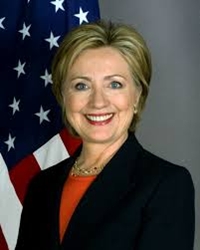 Since Hillary Clinton announced her candidature for Democratic nomination in the 2016 race for the White House on Sunday, news outlets and wire agencies have been humming and buzzing about perhaps the most prominent lady in recent US annals.

Having lost to President Barak Obama in the 2008 Democratic race, she is seen this time to have an advantage that could also prove a disadvantage. She has no serious rivals within her party; but at the same time her past makes her a target for the Republicans.

Republican contenders Jeb Bush, the former Florida governor, and Senator Rand Paul of Kentucky, wasted no time on Sunday criticizing Clinton. Following the video announcement of her candidacy, Bush tweeted, ''We must do better than Hillary.''

On the left, Bill de Blasio, the progressive mayor of New York, was non-committal on endorsing her candidacy, saying on NBC's Meet the Press that he wants to hear Clinton's vision for the country.

Clinton cast herself on Sunday as a champion of everyday Americans still struggling to recover from the 2008 recession, although she did not offer any specific policy prescriptions.

There is evidence that Clinton's standing with voters may already be suffering from Republican attacks and media scrutiny. In mid-January of this year, a Reuters/Ipsos tracking poll had Clinton as the first choice of 50 per cent of Democrats. As of last week, that number had dropped to 38 per cent.

Democrats including former Maryland Governor Martin O'Malley, former Senator Jim Webb of Virginia, and former Rhode Island Governor Lincoln Chaffee have suggested they will take Clinton on in the Democratic primary, but none of them seem to have the name recognition, the financial resources, or the campaign apparatus to mount a serious challenge to her.

Public fixture
Hillary Clinton has been a public fixture for 37 years, and at 67 she has once again set her sights on perhaps the most powerful position in the world.

Her recognition is undoubted, whether for good or bad. Who after all remains unfamiliar with the lives of Hillary and Bill Clinton?

They have not just endured but suffered and thrived in symbiotic tandem under the political spotlight since 1977, the year before Bill's election as governor of Arkansas.

Parts of first lady Clinton's archives have been made public, and candid papers of Hillary confidante Diane Blair, who died in 2000, are available at the University of Arkansas.

Bill Clinton's sexual proclivities were laid out in explicit detail. Hillary herself has recalled the rage she felt against her mentor-husband after the Monica Lewinsky scandal, the threat of divorce, the marriage-counselling.

By 1993, People magazine offered a cover-story peek into "The Real Woman Hillary Clinton."

Twenty-two years later, following a US Senate stint and four years as the international face of the Obama administration she remains omnipresent in the public eye.