Developing countries facing potentially hefty legal challenges from big tobacco firms would be able to draw on a $4-million fund created by billionaire philanthropists Michael Bloomberg and Bill Gates, who launched a joint fund in Abu Dhabi on Wednesday to help developing countries pass tobacco-control laws in their legal battle with industry giants. 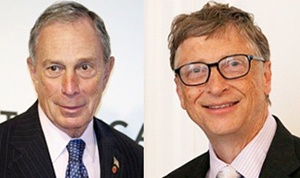 "We are at a critical moment in the global effort to reduce tobacco use, because the significant gains we have seen are at risk of being undermined by the tobacco industry's use of trade agreements and litigation," said former New York mayor Bloomberg.

"We will stand with nations as they work to protect their populations against the deadly health effects of tobacco use."

The announcement came on the second day of the 16th World Conference on Tobacco or Health.

Announcing the creation of the anti-tobacco trade litigation fund yesterday, Bloomberg Philanthropies and the Bill & Melinda Gates Foundation said countries having limited resources should not be bullied into making bad health policy choices.

"This new fund is going to help countries who are sued by the tobacco industry fight back in court and win," Bloomberg, the former mayor of New York and one of the world's richest people, told reporters in a telebriefing.

Bloomberg and Gates, the billionaire co-founder of Microsoft, cited examples such as Uruguay, which had, since 2010, been fighting a legal challenge by the cigarette maker Philip Morris International against the use of graphic health warnings on tobacco products.

Australia too, had been fending off a World Trade Organization challenge and a legal challenge by Philip Morris against its anti-tobacco laws (See: Australia may be hit with the third WTO suit over tobacco packaging).

According to Bloomberg, the tobacco industry's use of international trade agreements to threaten and prevent countries from passing tobacco control laws was unacceptable.

"This is not about trade," he said. "No one is a stronger supporter of capitalism and trade than I am. This is about sovereignty and whether a country has the right to set its own public health policies."

The World Health Organization had warned that although smokers were declining, rising smoking trends in African and Mediterranean countries meant the global total would not change much during the next decade.

About 80 per cent of the world's 1 billion smokers, according to WHO, lived in low- and middle-income countries.