Barack Obama's visit to Taj Mahal in Agra on 27 January has been cancelled, government sources said today, hours before the US President was to board Air Force One for his visit to India. 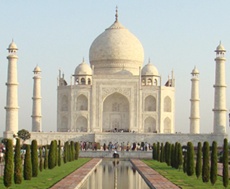 No reasons were forthcoming for the cancellation, though one might presume it is because of excessive security concerns.

Obama will fly to Saudi Arabia from India.

He will leave Andrews Air Force Base this evening for his the three-day trip to India on an invitation by Indian Prime Minister Narendra Modi.

Obama will be accompanied by a sizable delegation that will include several top officials as well as First Lady Michelle Obama when he arrives in New Delhi on Sunday morning, the White House has said.

The president will be joined in India by several members of his cabinet, business leaders and a host of US lawmakers, including Nancy Pelosi, the minority leader of the US House of Representatives.

Air Force One, the presidential aircraft that will fly Obama to India, will have a brief refuelling halt over Ramstein in Germany and will touch down in Delhi at 10am at the Air Force Station, Palam.

Obama, who will be the first US president to visit India twice while in office, was also looking forward to a series of serious meetings with political leaders in India, and certainly the with Modi, Earnest told reporters.

Obama, Earnest said, "certainly enjoyed the conversation" that he had with Modi when the latter visited Washington in September.

"I think he does see an opportunity to build a strong working relationship not just between our two countries, but between the two leaders who do share sort of a common sense of purpose and vitality," he said.

On his arrival, Obama will be accorded a ceremonial welcome around noon at Rashtrapati Bhawan by President Pranab Mukherjee and Prime Minster Narendra Modi.

Thereafter, he will pay homage to Mahatma Gandhi at Rajghat at 12.40 pm and participate in a tree planting event there.

Obama will then join Modi for a restricted working lunch at the Hyderabad House and participate in a "walk and talk" with the PM around 2.45pm, the White House said.

The two leaders will then have an expanded delegation-level meeting, which is expected to last about an hour. They will jointly address the press at about 4.10pm.

Later in the evening, Obama is scheduled to meet US embassy personnel and their families at ITC Maurya Hotel at 7.35pm. He will then drive down to Rashtrapati Bhawan to attend the state dinner with Mukherjee at 7.50pm.

On 26 January, Obama will participate in the Republic Day celebration as the chief guest along with the First Lady. Later, the Obamas will attend a reception hosted by the Indian President at Rashtrapati Bhawan.

In the afternoon, Obama and Modi will participate in a CEO forum roundtable and deliver remarks at a US-India Business Summit.

On 27 January morning, the US President will give an address at Siri Fort Auditorium before departing for Saudi Arabia.