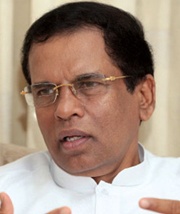 In a smooth transition of power Maithripala Sirisena, who scored an unexpected victory over incumbent President Mahinda Rajpaksa, was on Friday sworn-in as the sixth president of Sri Lanka.

This brings down the curtains down on the 10-year rule of Mahinda Rajapaksa.

Sirisena and his new Prime Minister Ranil Wickremesinghe, who till now was the leader of opposition, both took the oath of office in the Independence Square.

Wickremesinghe had met Rajapaksa in the morning when he conceded defeat and gave an assurance of smooth transition of power.

Sirisena, 63, was officially elected as the sixth President of Sri Lanka by Commissioner of Elections Mahinda Deshapriya.