US exonerates black teen of murder 70 years after his execution

In a startling example of America's long history of discrimination against 'blacks', a US court on Wednesday overturned the conviction of a 14-year-old African-American boy who was sent to the electric chair 70 years ago after an almost cursory trial. 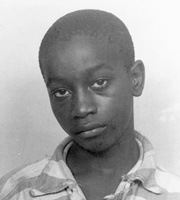 When George Stinney Jr was made to 'ride the lightning' for the battering to death of two white girls in 1944, he was so small that the straps of South Carolina's electric chair didn't fit him properly, and he had to sit on a book for his electrocution.

Stinney was just 14 at the time and became the youngest person put to death in the United States in the 20th century. But, now, 70 years after the fact, Circuit Judge Carmen Mullen tossed out his conviction, which was reached after a trial that didn't even last a full day and was never appealed.

As the Associated Press noted, it took Mullen ''nearly four times as long to issue her ruling as it took in 1944 to go from arrest to execution.''

''I can think of no greater injustice,'' Mullen wrote in her 29-page order.

Stinney, was arrested for the beating to death of two young girls in the segregated town of Alcolu. There was no physical evidence linking him with the crimes, and shockingly, he wasn't allowed to see his parents after he was apprehended.

''Given the particularised circumstances of Stinney's case, I find by a preponderance of the evidence standard, that a violation of the defendant's procedural due process rights tainted his prosecution,'' Mullen wrote in her decision.

Stinney's case has long been whispered in civil rights circles in South Carolina as an example of how a black person could be railroaded by a justice system during the Jim Crow era where the investigators, prosecutors and juries were all white.

The case received renewed attention because of a crusade by textile inspector and school board member George Frierson. Armed with a binder full of newspaper articles and other evidence, he and a law firm believed the teen represented everything that was wrong with South Carolina during the era of segregation.

''It was obviously a long shot but one we thought was worth taking,'' said attorney Matt Burgess, whose firm argued that Stinney should get a new trial.

Earlier this year, Stinney's sister told the London newspaper The Guardian, ''I never went back [to Alcolu]. I curse that place. It was the destruction of my family and the killing of my brother.''

She told AP she will never forget the last time she saw George alive. She was eight at the time, hunkering in the chicken coop, scared half to death, when two black cars drove up to their house. Neither her mother, also Aime, a cook, nor her father, George Senior, were home when law enforcement officers came and took away George and her stepbrother, Johnny, in handcuffs. Johnny was later let go.

''I never saw him again until he was in his casket,'' said Aime. ''That is something I will always see in my memories. His face was burned.''